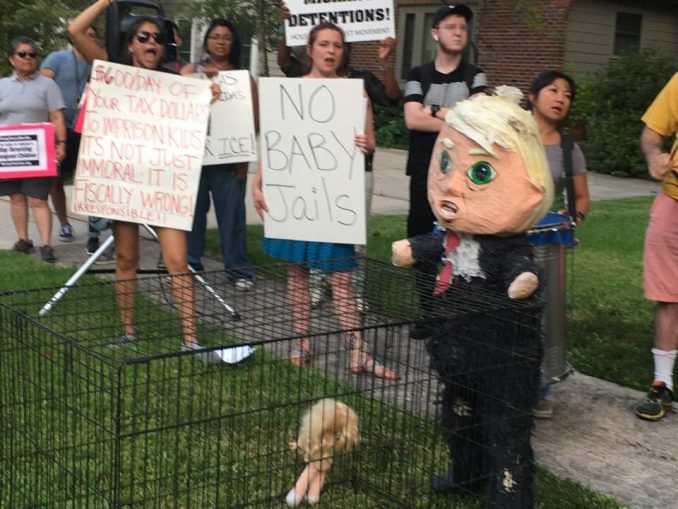 The Free Los Niños Coalition held its third protest, on Aug. 4, at the home of wealthy real estate gentrifier David Denenberg, demanding he cancel the lease for his property that is planned to open as a kids’ prison. Gathering in Houston’s wealthiest neighborhood, the crowd blasted speeches and chants to the neighbors, telling them to ask Denenberg to not allow his property to bring more misery to families and children who have already been traumatized enough.

The visual of kids in a cage being watched over by a piñata of Donald Trump, drumming by the Free Radicals and Mario Salinas, poetry by Antonio Gonzales, and chanting led by Rona Smith was militant and empowering.

Two days earlier, four members of the coalition went to a job fair held by Southwest Key to fill positions at their five detention centers in Houston, including the one they plan to open. After passing out flyers to 150 people waiting for interviews that documented the organization’s crimes, the activists began loudly chanting, as they were asked to leave: “No Trump! No baby jails! Don’t work for Southwest Key!”

Another demonstration will be held at the newest detention center, at 419 Emancipation Ave., on Aug. 11 at 5:30 p.m., as crowds walk by on their way to a Houston Astros baseball game. Information is available at tinyurl.com/FB-FLNC.