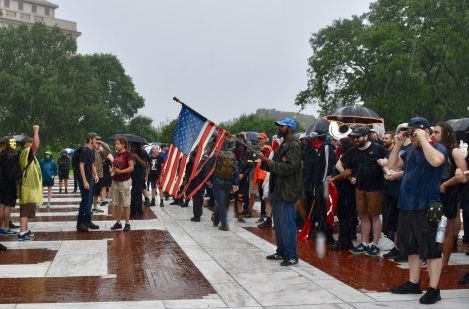 Despite heavy rain, the anti-fascist working class of Providence, R.I., and their local allies turned out in force on Aug. 4 to stop a demonstration by the fascist umbrella group “Resist Marxism.” The group has been active in Boston and across the U.S. for some time, providing a veneer of legitimacy under which more extreme fascist groups can organize.

The primary constituents of the fascist rally were American Guard, an anti-immigrant hate group, and a “free speech” group, both of which were armed and ready to assault counterprotesters.

The group’s emergence in Providence is worrying, but local people of color and LGBTQ organizers were aware of the danger these fascists pose to our communities and were able to organize a militant, determined response.

Despite a heavy police presence, the anti-fascist, working- class activists were able to drive these reactionaries from the plaza in front of the Rhode Island State House in a humiliating defeat for the local fascist movement.