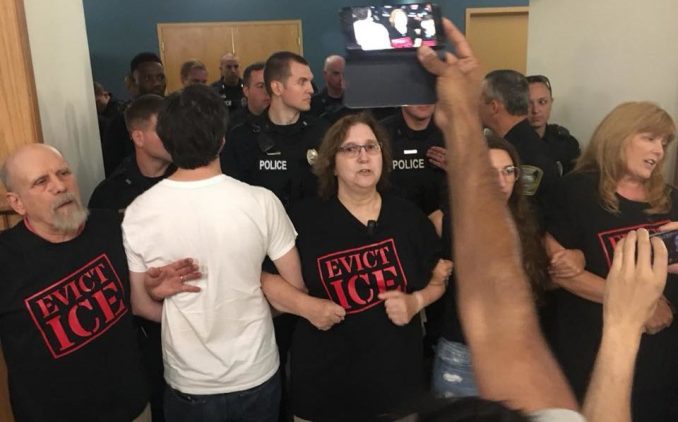 Abolish ICE activists occupied the hallway leading to U.S. Immigration and Customs Enforcement offices in Syracuse, N.Y., on July 31 before 10 people were arrested.

About 100 people had marched to the ICE location at 401 S. Salina St. where a spokesperson read an eviction notice to the agency. This said in part:

“We have found your office and its counterparts in violation of a series of basic human rights in Syracuse: You have intimidated the entire immigrant community by working with Border Patrol to establish public transportation checkpoints, by invading or threatening to invade the homes of residents, and through aggressive interrogations of our community members. You have kidnapped an as-yet unknown quantity of Syracuse residents … and you have traumatized the family members and children of abductees. … Our community does not need your so-called ‘protection.’ … Get out, now.”

Participating in the march and action were members of the Syracuse Immigrant and Refugee Defense Network, the Workers’ Center of Central New York/Centro de Trabajadores-CNY, the Syracuse Peace Council, the International Socialist Organization and other groups.