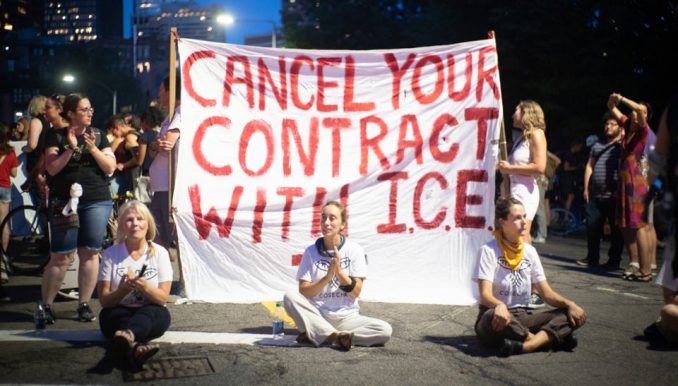 Boston — As night fell on July 31, protesters from Movimiento Cosecha, who had gathered outside the house of Northeastern University’s president, announced that they would be occupying the area until Northeastern canceled its $2.7 million contract with Immigration and Customs Enforcement. Protestors blocked Boylston Street, singing and telling stories until 1 a.m., when cops moved in and arrested 11 occupiers.

One week earlier, Cosecha and supporters had gathered in a park near the Northeastern University campus. They marched with signs decrying Northeastern’s connection to ICE through the Ruggles T subway station and into a student orientation taking place.

Once there, they held a speakout explaining the university’s contract with ICE to the new students and dropped a banner reading, “Northeastern, we won’t be complicit” from a walkway between buildings. They called on the students to aid in telling the university to shut down its contract and informed them that this was just the first of Cosecha’s actions.

Cosecha rallied supporters at the Ruggles T station again on July 31 and led them on another march, going through downtown Boston during rush hour and ending outside university President Joseph E. Aoun’s home.

They proceeded to hold a speakout, demanding that Aoun cancel the contract. Speakers included undocumented organizers from Cosecha, a representative from FIRE (Fight for Im/migrants and Refugees Everywhere), and the fiance of a man who was taken by ICE just days before their wedding.

Cosecha organizers then revealed that they intended to continue this protest as an occupation and that they would be camping outside Aoun’s house until their demands were met. As the occupiers prepared for the night and the following morning, the cops moved in and arrested them all.