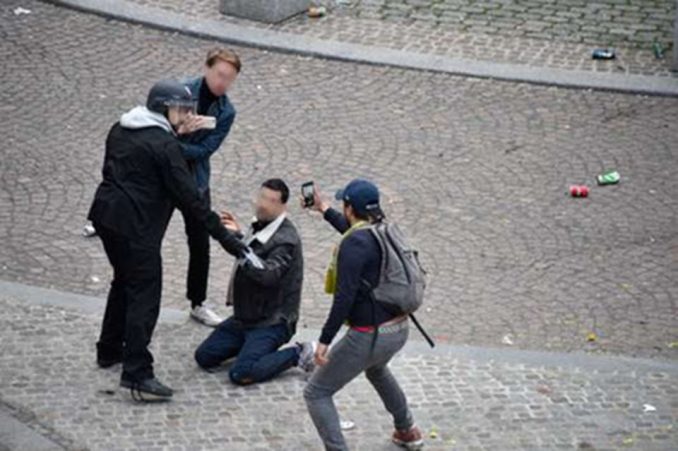 Alexandre Benalla (wearing a helmet), an “assistant” to President Macron’s chief of staff, intimidates a protester, while two passers-by film the incident.

Paris, July 29 — In recent months, crackdowns on social movements in France have jumped several notches. The state of emergency, replaced in November 2017 by the Anti-Terrorism Act, has played a major role. But it is above all the multiplication of workers’ struggles, in many sectors of society, which underlies the expansion of police and military operations.

Until very recently, visible opposition to President Emmanuel Macron came from the streets, the unions and the mobilized public, much more so than from the politicians and the media. Everything changed on July 18 with the eruption of the “Benalla affair.” Three days were enough to take the French presidential palace from the euphoria of the French soccer team’s victory at the football world cup to a political earthquake of unimaginable magnitude.

The same media that had served as Macron’s war machine to get him elected head of state remind him today that his executive power is limited to that of carrying out the demands of the big capitalists. In Parliament, the shock caused by the “Benalla affair” has managed to unite the traditional right (the Republicans) and what I will call the “new right” (what remains of social democracy) alongside the parliamentary far left (Jean-Luc Mélenchon’s France Insoumise and the Communist Party) and the extreme right (former National Front, now National Rally) in generalized opposition to Macron.

What is this “affair” about? On July 18, videos dating from May 1 began to circulate on the internet showing a man wearing a helmet — who turned out to be the assistant to Macron’s chief of staff, Alexandre Benalla — arresting and beating a young couple after the Workers’ Day demonstration in Paris.

Benalla showed himself to be brutal — the very image of such repressive attacks — but even worse: He wore police insignia, although he is neither a police officer nor a soldier. He is only a bodyguard, bloodthirsty and a fighter, but much appreciated by Macron, who recruited him during his election campaign and then propelled him into his presidential cabinet.

We then learn that Benalla, barely 26 years old and having received only on-the-job security training for the “Socialist” Party, was benefiting from the following privileges: ultrafast promotion, a comfortable salary, carrying weapons obtained by irregular procedures, allocation of an apartment in one of the nicest neighborhoods in Paris.

Some of these favors were clearly outrageous, including the authority to give orders to police and soldiers, the right to wear a law enforcement armband, free access to the National Assembly and “friendly contacts” with police officials who provided him with the surveillance video footage that implicated him. In addition, Macron’s cabinet claims to have immediately punished the perpetrator for his excessive zeal — without any trace of such a punishment. Indeed, Benalla continued to run with the president, collect his salary and hold onto his privileges.

Campaign slogans promising an “exemplary Republic” gave way to suspicions that a parallel (illegal and “private”) police force obedient to the president had been created. Macron and his government — stunned — remained mute for several days in the face of demands for explanations from all sides.

Ten hours of parliamentary battle were necessary for the opposition to suspend debate on constitutional reform (sought by Macron because it would give him even greater powers than the immense ones he already wields) and to form a commission of inquiry. The minister of the interior told this commission he knew nothing, while a parade of senior officials added that they knew little more.

And for good reason: Everything was happening at the Elysée (presidential palace). It took a week (of chaos) before Macron intervened. He did it his way, provocatively, saying in substance: “I alone am responsible. And whoever would like to try, let them come get me!”

Come get him? But those who know French political institutions know that the Constitution of the Fifth Republic strongly protects the president. What Macron is actually saying is that, as a little puppet of big finance, he will act forcefully to carry out the will of his capitalist masters in defiance of all counterpowers: Parliament, the media, popular demonstrations.

Some nonparliamentary voices are demanding the French equivalent of Macron’s impeachment. Two motions of censure against the government were tabled in the National Assembly. The “Benalla affair,” which still hasn’t run its course, has profoundly — and opportunely — tar­nished Macron’s image at home and abroad. It is paving the way for the workers to resume in September, under better conditions, their struggle for social benefits.