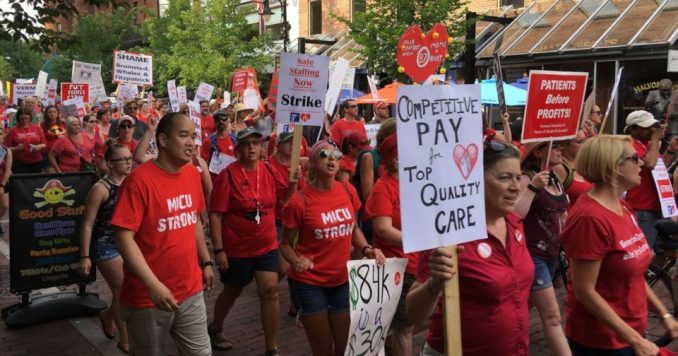 The 1,800 nurses and 300 health professionals at the University of Vermont Medical Center (UVMMC) kicked off a 2-day strike in Burlington on July 12-13. Their union, the Vermont Federation of Nurses and Health Professionals Local 5221, is striking because their low wages directly result in unsafe staffing ratios. The hospital ranks among the lowest for pay in a state that ranks 47th in nurses’ wages. That’s why the strike demands wages competitive with those of other nurses in the region — a 23 percent raise.

Unable to recruit and retain because of these conditions, the hospital relies on traveling nurses for 13-week gigs and forces its own nurses to work down — doing support work like laundry, billing, coding, cleaning rooms and walking patients across the hospital, all of which take time from vital patient care. While UVMMC is the second largest employer in the state, it usually has vacancies for between 130 and 180 positions. The workers are also demanding a $15 minimum wage for all employees.

Throughout negotiations, management has pursued a campaign of bullying and intimidation, leading the union to file 21 unfair labor practice charges. Management has stubbornly rejected union proposals, refusing to negotiate, blocking union staffers from coming on site, tearing down union fliers and failing to seat key decision makers — hospital executives with power— at the bargaining table. The last bargaining session was held on July 24 with no resolution in sight. The hospital pays lavish salaries — nearly $11 million to 15 administrators, including $2 million to its CEO. Meanwhile, the hospital has more than 220 days of operating cash on hand.

The union knows that the success of the strike depends on community and labor support. Organizations sending solidarity include nurses from New York and Massachusetts, a number of unions, International Socialist Organization, Democratic Socialists of America, and Vermont Workers Center. The Workers Center proposed an “Alliance in Support of UVMMC Nurses” with educational events and pickets. And taking a cue from the #RedforEd solidarity campaign, it launched #RedforMed, calling for pictures to be posted of supporters wearing red on the picket line. (Truthout.org, July 14)

This recipe of broad community support and outreach to attack chronic understaffing and low wages is a teachable hallmark for all workers. It’s time to put patients above profits!

Nike, the global, multibillion-dollar sportswear brand, connected the patriarchal dots after reports of workplace misconduct and discrimination against women surfaced. In a #MeToo moment, at least 11 senior managers were forced out after an investigation exposed widespread harassment and bias against women.

More than 7,000 women workers, about 10 percent of Nike’s 74,000 employees worldwide, will get raises and opportunities for advancement. Nike characterizes its “adjustments” as establishing “a corporate culture ‘in which employees feel included and empowered,’” according to an internal July 23 staff memo quoted by the July 24 New York Times. After apologizing to the workforce for “missing signs of discontent,” Nike CEO Mark Parker pledged to change pay and management training programs to “reflect its goals of equal pay and work force diversity.”

According to the Times, more than 100 large companies such as AT&T, Gap, Mastercard and Target have already announced they plan to review salaries annually and close the gender pay gap.

Gee whiz, what took them so long. The movement for pay equity has been around for decades. But thanks to the #MeToo Movement, some CEOs finally got the memo!

About 9,500 workers at Disneyland Park, Disney California Adventure Park and Downtown Disney, represented by four labor unions in the Master Services Council, reached a tentative agreement on July 23. (For background, see WW article, May 28.) Disneyland Resort officials have proposed a 36 percent wage increase over a three-year contract for hourly workers at the attractions, stores, main entrance, costuming, bakery/confection, resort transportation and parking, custodial services and onsite distribution center. Under the proposal, the workers would make $15 an hour by 2020, which would be two years ahead of the state’s minimum wage standard.

The agreement, still to be ratified by the workers, followed months of protests by employees, some of whom complained of earning poverty wages. As Artemis Bell, MSC bargaining committee member, noted: “Disney workers have been hiding in shame for too long, and it took us coming forward and taking a stand to make a real change.” (nbcbayarea.com, July 23)