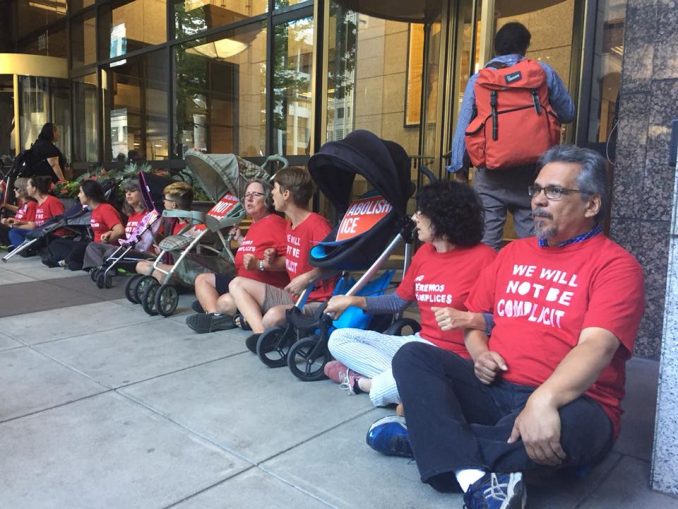 Seattle — Domestic workers here have won industrywide standards under basic labor laws for the first time by winning a Domestic Workers Bill of Rights in Seattle. The National Domestic Workers Alliance won the breakthrough law at the Seattle City Council meeting on July 23 after months of campaigning.  Then, on July 26, the NDWA called a militant action at U.S. Immigration and Customs Enforcement headquarters here against deportations and the separation of families.

There are 33,000 domestic workers in Seattle. Nannies, cooks, house cleaners and gardeners, who are mostly women and people of color, have for far too long been excluded from basic labor protections. Under the new law, domestic workers will now receive minimum wage protection plus meal and rest breaks. The law also protects the workers from having their basic documents, like passports, taken away.

Funding for enforcement will be increased. The law covers all part-time, full-time, independent contractor and live-in domestic workers in the city, regardless of whether they are technically employed by an agency or a family. (workingwa.org)

The law establishes a Domestic Workers Standards Board, comprised of workers and management representatives, to make regular recommendations for improving the law.  The board will oversee enforcement and work to provide protection against discrimination and sexual harassment. The National Domestic Workers Alliance was supported in this victory by Service Employees Local 775 and the labor/community organization Casa Latina.

Following the law’s passage, the Domestic Workers Alliance, along with Casa Latina, called an action against the ICE/Trump war on im/migrant families. July 26 was the 30-day deadline for the federal government to return the 3,000 children who were seized by ICE to their parents. There were protests around the country on this date, but Trump failed to meet the deadline.

In Seattle, at least 25 people with baby strollers blocked the entrance doors to the ICE headquarters for three hours. A hundred other demonstrators supported them. Protesters carried signs reading, “Nannies Say Families Belong Together, Not in Cages!”

Spokeswoman for the Domestic Workers Sylvia Gonzalez said, “We are here in front of ICE committing civil disobedience to stop the separation of families and reunite the children with their parents, because the children are very much affected by their separation.”