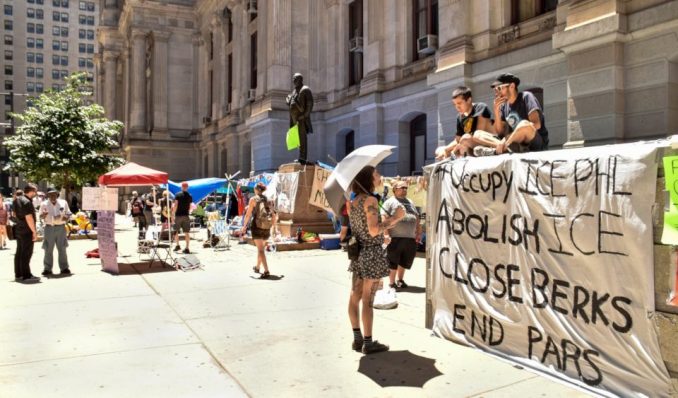 The weeks of protests and occupations outside the federal Immigration and Customs Enforcement agency and Philadelphia City Hall brought about a key victory as Mayor Jim Kenney announced on July 27 that he would not renew PARS, the city’s data-sharing contract with ICE.

The announcement came one day after demonstrators took over and held a City Hall stairway, blocking access into the building. The contract is set to expire Aug. 31.

Ending the ten-year contract that gave ICE agents access to the police database system was one of three demands put forth by a broad network of im/migrants’ rights activists. Their struggle started July 2, when hundreds of people set up an encampment outside the ICE office in Center City.

Other demands were to abolish ICE and close the Berks County Family Detention Center. Hundreds of undocumented migrants, including children, have been held in the center, some for years, awaiting deportation hearings.

Kenney has maintained that Philadelphia is a “sanctuary city.” He even went to court to stop federal government efforts to deny funding because of that status. Nevertheless, immigrant rights activists and others have challenged the validity of Kenney’s claim because of PARS as well as the city’s stop-and-frisk policies.

The PARS system gave ICE agents access to police records that contained names, addresses and even countries of origin for anyone who had come in contact with law enforcement as a witness or to file a complaint, even when no laws were broken.

ICE used PARS records to target and profile individuals born outside of the U.S., even where there was no reported infraction. PARS enabled ICE to track down people and deport them and to detain people when they appeared for court dates or probation appointments.

An investigation by ProPublica and the Philadelphia Inquirer found that under the Trump administration ICE officials in Philadelphia were the most aggressive in the U.S., leading the country in noncriminal arrests. Some 64 percent of im/migrants arrested in Philadelphia in 2017 had no criminal convictions. The studies also raised concerns over Philadelphia ICE’s potentially illegal tactics. (BillyPenn.com, April 13)

Demonstrators set up the encampment outside City Hall on July 6 after police raided and destroyed an encampment of hundreds of activists outside the ICE office.  The City Hall encampment held frequent small street demonstrations and provided opportunities to raise awareness of other struggles, including the fight for disability rights and for the needs of people without homes.

Prison rights activists, including Pam Africa and Michael Africa Jr. from the MOVE organization, spoke to the protesters and gave information on the MOVE 9 and Mumia Abu-Jamal.  On July 25, demonstrators from the City Hall encampment joined a march, when it reached their location, for Puerto Rican independence from U.S. colonialism.

Kenney informed the protesters on July 27 that they would have 24 hours to shut down the encampment, citing an upcoming “construction project” at that location.  A similar excuse was used by city officials in 2011 to shut down Occupy City Hall, part of the Occupy Wall Street movement.

Demonstrators packed up camp July 28 and moved across the street to the Municipal Services Building. They were then near the controversial statue of former Philadelphia mayor and top cop Frank Rizzo, itself a longtime target of anti-police brutality activists calling for its removal.  City officials announced months ago that Rizzo’s statue would be taken down, but no action has followed.

Occupy City Hall protesters pledge to remain and to link their demands to Abolish ICE and close Berks, alongside demands to end stop-and-frisk and to fight for people who are homeless. 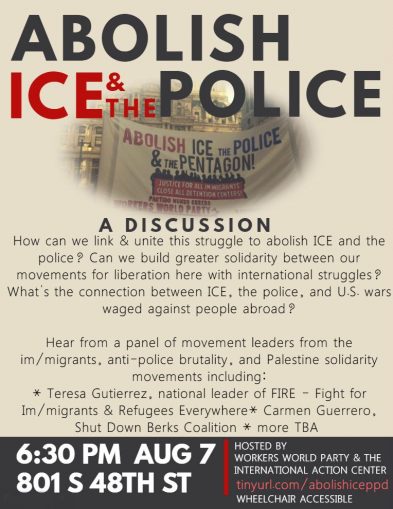