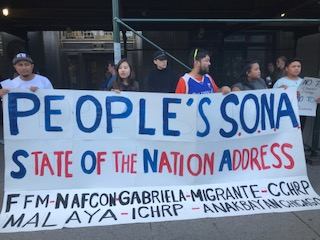 Three dozen demonstrators rallied outside the Chicago Consulate of the Philippines on July 23 to expose the killing of more than 20,000 people by the brutal regime of President Rodrigo Duterte, as it begins its third year.  The demonstrators charged that the regime, which is waging a murderous “drug war” and imposing martial law in Mindanao province, is financed by tens of millions of U.S. tax dollars desperately needed here for jobs, schools and health care.

The Chicago action was one of hundreds of protests worldwide timed to coincide with Duterte’s State of the Nation address. It was organized by Anakbayan Chicago, Malaya and the Chicago Committee for Human Rights in the Philippines.