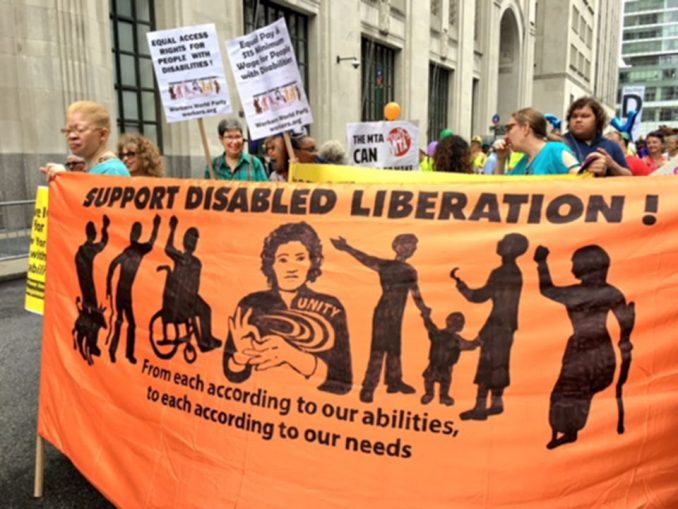 On a glorious Sunday morning, after a thunderstorm had cleared the air, thousands of disabled New Yorkers with their friends and families walked, rode, rolled and scooted down Broadway from Madison Square Park to Union Square Park in the July 15 Disability Pride Parade.  A festival was scheduled at the end of the parade.

Spirits were high.  Concerns about the heat had been raised in social media by many groups, including the NY Peoples Power Assemblies. The PPA had carried out a vigorous “We Want the Shade” campaign to reverse the route so the parade would end at Madison Square Park and the three-hour festival could be held in the shade.  Many disabled people are adversely affected by excessive heat. In 2015, three participants had been hospitalized due to heat exhaustion.

As a result of this campaign, the city spent a significant amount on two large tents to provide shade in the paved, treeless part of the park where the festival was held.

The theme of the parade was “Express Yourself” and prizes were awarded to the most creative.  The feeling was definitely celebratory. Two men sitting on benches played bongo drums. Wheelchair dancing took place in a designated area in front of the stage. At one point, a wheelchair user threw her hands up in joy as her partner twirled her around several times.  “Move whatever you’ve got — a toe, a head, an arm” encouraged the emcee.

At 12:15 p.m., disabled people gathered in front of the stage to protest Gov. Andrew Cuomo’s threat to close the Independent Care System, which provides essential services that enable disabled people to live at home.

Wheelchair user Sharifa Abu-Hamda, founder of the Civic League for Disability Rights, thrilled the excited crowd with a speech demanding Cuomo end his horrific plan to close ICS.  She emphasized that the Civic League has fought to protect Medicaid, to maintain funding for wheelchairs and equipment, and to make public transit more accessible.

She explained that “today we are fighting to save Independent Care Systems also known as ICS.  ICS exists for one reason: to make sure that people like me, people with physical disabilities, are able to live independently.  No other insurance does that.

“Governor Cuomo is planning to close ICS.  He says we will be able to get the same services from any other plan we enroll in.  That is not true. The state wants to close ICS to save money, and the only way to do that is to cut our services.  Because of my condition, I need 24-hour home care, which ICS pays for. No other plan has ICS’s disability expertise.  ICS made it possible for me to work and live in my own home [and] undergo complicated surgery and emerge in good health when my own doctors did not have a clue how to make that happen.  My story is multiplied thousands of times. …

“We have the right to live independently with dignity instead of being locked up in institutions.  Governor Cuomo: Save ICS.”

Some 50 wheelchair users then surrounded the stage.  Holding up a handmade paper sign reading “ICS Is the Best,” they chanted, “Save ICS!” for more than 15 minutes.

The grand marshal of the parade was Judy Heumann, a wheelchair user who pioneered the disability rights movement.  As a student at Long Island University, she organized disabled students to fight for ramps. She sued her school district for the right to teach.  In 1970, she founded Disabled in Action, a vanguard group in the disability civil rights movement. In 1977, she took part in a 28-day sit-in for disability rights in San Francisco.  In 1981, she helped found the World Institute on Disability.

More than 30 signs prepared by Workers World Party, Peoples Power  Assemblies, Peoples MTA and Parents to Improve School Transportation were handed out through the crowd, some enthusiastically mounted on wheelchairs.  Issues included the police killings of disabled people, lack of elevators and access to the subway system, and defending Medicaid, the Americans with Disabilities Act (ADA) and ICS.