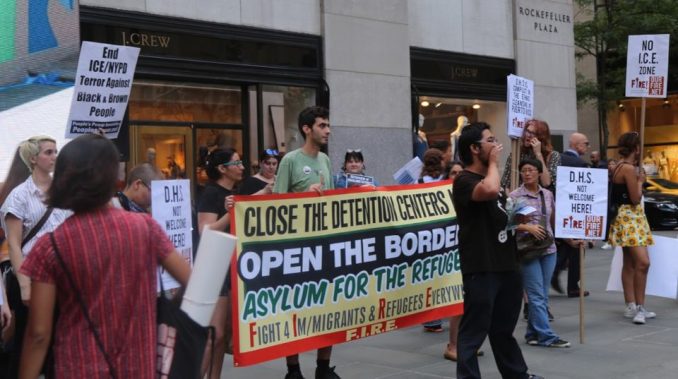 Chanting “No more kids in cages! Stop the deportations!” and “No ban on stolen land!” protesters marched around the plaza at Rockefeller Center in New York. At one point, they pushed through a police barricade, took the bleachers and hung a banner over the wall which declared: “Close the Detention Centers Now. Open the Borders. Asylum for Refugees.”

They were protesting there July 11 because the National Homeland Security Conference, an annual event aimed at creating propaganda to promote the Department of Homeland Security and private security contractors who are responsible for the detention and deportation of millions of immigrants, was holding a dinner inside Rockefeller Center. As conference attendees gathered in the sunken area at the center of the plaza, where the ice rink is in the winter, protesters sent them a loud message.

The newly formed group FIRE (Fight for Im/migrants and Refugees Everywhere) called the demonstration. FIRE’s goal is to get rid of Immigration and Customs Enforcement, dismantle concentration camps holding immigrants and tear down any racist border wall that Trump tries to build. Many people passing by showed their support for the protest, which was taking place as children snatched from their parents at the border remain locked up in detention centers, terrified because of the violent separation.

— Report and photo by Brenda Ryan