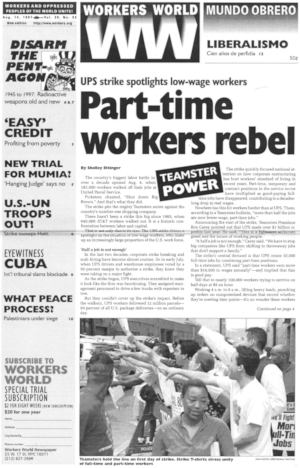 United Parcel Service workers, represented by the Teamsters, are currently in contract negotiations with the company. On June 5, union members voted by a 93 percent margin to strike if an agreement could not be reached. Members could also strike if an agreement between the union negotiating committees and management is voted down. Existing contracts expire on July 31.

On July 10 and 12, the Teamsters negotiating committees announced agreements in principle with UPS and UPS Freight on new contracts. Now that the union negotiating team has reached a “handshake deal” with management, the contract offers must be sent to UPS Teamster-represented members for approval, which can take several weeks. Fifty percent plus one of the votes cast must be “yes” to obtain ratification.

A “Vote No” momentum has emerged, and is being promoted by the Teamsters United caucus and some union locals because of concessions obtained by management in the announced agreements. The concessions include a 70-hour workweek, poverty wages for part-timers and unlimited subcontracting of work. UPS, now making $6 billion a year in profits, is at present the largest union employer in North America, with about 260,000 Teamster-represented drivers, loaders, unloaders, sorters, clerks and others.

The following excerpt, titled “Decades of rank-and-file fight-back,” about the militant UPS strike of 1997 is from Chapter 11 of “Low-Wage Capitalism” by Fred Goldstein (World View Forum, 2008). See more at lowwagecapitalism.com.

The slide in union membership, the decline of wages, and the general deterioration of living conditions for the working class, as well as the increase in racism and national oppression, the wave of anti-immigrant attacks, and all the other setbacks during the last three decades and more, were not inevitable. They were avoidable.

The underlying relationship of class forces in U.S. capitalist society was not objectively so unfavorable to the working class that it had no way to overcome the anti-labor offensive. Nor is further decline inevitable, even in the face of capitalist crisis.

What has contributed to the feeling of inevitability about the retreat of the labor movement and the workers in general has been the steadfast refusal by the AFL-CIO leadership, including the Change to Win leadership that set up a parallel federation in 2005, to muster the latent power of the workers and the oppressed in a true test of strength with the ruling class.

To be sure, there are undoubtedly thousands of local union leaders, delegates, shop stewards, labor council members, as well as rank-and-file militants throughout the labor movement, in every part of the country, who have been straining at the bit to launch a fight-back. Such militancy has manifested itself over and over again in struggles during the 1980s up until the present day. What will revive the labor movement is when these forces are able to multiply, organize, and gain the upper hand.

The strike against United Parcel Service was a powerful one that fought to reverse concessions, which had begun in 1982. The company had won the right to create a two-tier, part-time system of employment.

In August of 1997 the 185,000 members of the UPS division of the Teamsters union waged a 15-day strike that electrified the labor movement and the working class as a whole. Despite compromises made in the final settlement, it was understood, rightly so, as the first major victory for a significant section of the working class after two decades of defeat and retreat.

The strike was led by Teamsters President Ron Carey, who had democratized the union during his tenure. It was won by meticulous planning for a
genuine class struggle, bringing in the rank-and-file at every stage.

The struggle was popular in the union movement and among the working class as a whole because it was projected as a struggle against part-time and low-wage work — not just for UPS workers, but for the working class as a whole. Sixty percent of the 185,000 UPS workers were part-time workers who earned only $9 per hour, as opposed to $19.95 an hour, plus benefits, for full-time workers.

The UPS Teamster leadership prepared for the strike for over a year. In formulating their bargaining position, the leadership of the UPS division sent a questionnaire to all 185,000 workers asking for their views on the most important issues. Full-time jobs were the overwhelming priority for the workers. In addition, 10,000 of these workers were receiving part-time pay but were working 35 hours or more a week.

The union collected 100,000 signatures on a petition supporting its demands. It distributed the union’s position at workplaces, sports events, and other sites long in advance. It prepared a strong strike apparatus.

Once the negotiations were underway, the union sent a video to all UPS
shop stewards to keep them up to date. During the strike, the union updated its web site every few hours, faxed bulletins to Teamster locals, and set up a toll-free hotline for strikers.

The negotiations were to begin in July of 1997 but rallies were organized around the country beginning in March and continued to multiply up until the strike deadline. Carey had even gone to Germany and France and worked with the UPS unions there to support the strike.

When the UPS rank-and-file marched into battle they were thoroughly unified, highly organized, and prepared for struggle against a ruthless corporate giant with a world empire.

The strike was won through a major test of strength between labor and capital. The AFL-CIO leadership supported the strike, and John Sweeney promised to back the Teamsters’ strike benefit fund with $10 million a week.

During the strike President Bill Clinton was under pressure — from not only UPS but also Wall Street — to invoke the Taft-Hartley Act. The strength and broad popularity of the UPS workers pushed the Clinton administration back, even though Clinton finally pressured a settlement and leaned on the union to compromise.

Nevertheless, the UPS workers forced the company to agree to turn 10,000 part-time workers into full-time employees, won raises for the lower-paid workers, and warded off an attack on pension funding.

The forward momentum of the workers’ struggle arising out of the UPS strike was soon undermined, however. Immediately after the strike, the government framed up Carey on charges of illegally funneling funds to his union election campaign fund. A federal court cleared him of all the charges, but a so-called Independent Review Board got Carey barred for life from running for Teamster office.

This board had been set up by the Justice Department in 1989 to oversee the Teamsters. It was headed by William Webster, a former director of both the CIA and the FBI. The Democratic National Committee cooperated with the frame-up, despite the fact that the AFL-CIO leadership, including Carey, had poured hundreds of millions of dollars into getting Clinton elected.

Fearing a government attack, the AFL-CIO leadership left Carey to face the frame-up and ouster alone. Instead of standing up and challenging the government to indict the entire top leadership of the union movement, and preparing the rank-and-file to defend the leader who had launched the biggest union challenge to big business in two decades, they abandoned the struggle.

The forward momentum gained by the militant mass struggle of 185,000 workers, backed by workers everywhere, soon died down. What the mass struggle had won was diminished by the craven retreat of the leadership.