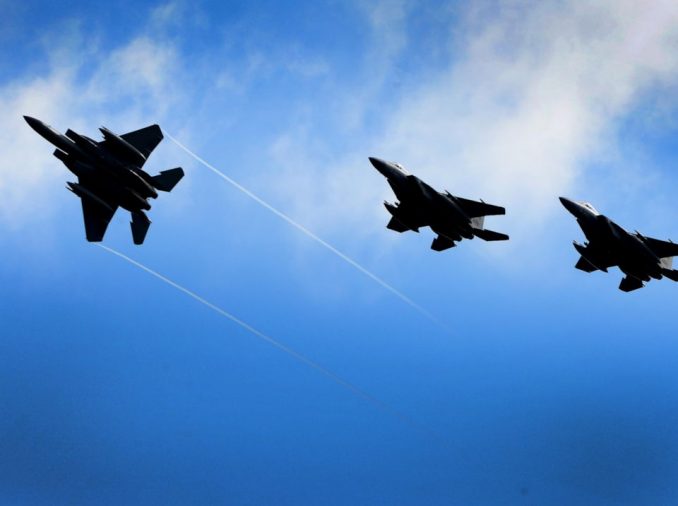 The author is an anti-military historian who writes often about the aggressive character of NATO and its role in Italy. These two articles were published July 11 in Il Manifesto and translated by WW managing editor John Catalinotto. At a time when the Democratic Party opposition to the reactionary U.S. president is criticizing him for allegedly disrupting NATO, it is helpful to remind readers that NATO is an instrument for imperialist domination and was used to destroy Yugoslavia and Libya, and wage war in Afghanistan.

July 11 — The NATO Summit is taking place today and tomorrow in Brussels, Belgium, at the level of heads of state and government of the 29 member countries. The summit confirms at the highest level the strengthening of the control structure, which is mainly to work against Russia. A new Joint Command for the Atlantic will be constituted, in Norfolk, Va., in the United States, against “the Russian submarines which threaten the lines of maritime communication between United States and Europe,” and a new logistic command, in Ulm, Germany, as a “deterrent” against Russia, with the task of “moving the troops more rapidly through Europe in whatever conflict arises.”

By 2020, NATO will have 30 mechanized battalions, 30 air squadrons and 30 combat vessels in Europe, which can be deployed against Russia within 30 days or less. President Trump will thus have stronger cards in his hands at the bilateral summit with Russian President Vladimir Putin on July 16 in Helsinki, Finland. The situation in Europe will depend fundamentally on what the U.S. president determines at the negotiating table.

NATO’s reach extends far beyond Europe and the alliance’s own members. It has a number of partners, linked to the alliance by different military cooperation programs. Among the currents that are included in the Euro-Atlantic Partnership are Austria, Finland and Sweden. The Mediterranean partnership includes Israel and Jordan, which have permanent official missions to NATO headquarters in Brussels, plus Egypt, Tunisia, Algeria, Morocco and Mauritania.

NATO — founded in 1949, six years before the Warsaw Pact, formally based on the defensive principle established by Article 5 — has been transformed into an alliance which, based on the “new strategic concept,” commits member countries to “conduct crisis response operations not provided for by Article 5, outside the territory of the Alliance.” According to the new geostrategic concept, NATO has extended to the Afghan mountains, where it has been at war for 15 years.

What has not changed, in the mutation of NATO, is the hierarchy within the alliance. It is always the president of the U.S. who appoints the allied supreme commander for Europe, who is always a U.S. general, while the allies simply ratify the choice. The same applies to the other key commands. U.S. supremacy has been strengthened with the enlargement of NATO, since the countries of the East are tied more to Washington than to Brussels.

The same Maastricht Treaty of 1992 establishes the subordination of the European Union to NATO, which includes 22 of the 28 countries of the EU (with Great Britain leaving the Union). Article 42 of the treaty states that “the Union shall respect the obligations of certain Member States, which see their common defense realized in NATO, under the North Atlantic Treaty.” And Protocol No. 10 on cooperation established by Article 42 emphasizes that NATO “remains the foundation of defense” of the EU.

The Joint Declaration on EU-NATO cooperation, signed yesterday in Brussels on the eve of the summit, confirms this subordination: “NATO will continue to play its unique and essential role as the cornerstone of collective defence for all its allies, and the EU’s efforts will also strengthen NATO.”

The Pesco [Permanent Structured Cooperation] and the European Defense Fund, stressed Secretary General Stoltenberg, “are complementary, not alternatives to NATO.” Military mobility is at the core of the EU-NATO cooperation, as enshrined in the Joint Declaration. The “EU-NATO maritime cooperation in the Mediterranean to combat the smuggling of migrants and thus alleviate human suffering” is also important.

In this framework, under pressure from the U.S., the European allies and Canada have increased their military spending by $87 billion from 2014. Despite this, President Trump will be slamming his fists at the summit table, accusing the allies of spending less together than the U.S. “All the allies are increasing their military spending,” assures NATO Secretary General Stoltenberg. (defensenews.com, June 7) The number of countries that spend at least 2 percent of their gross national product on military spending has increased from three in 2014 to eight in 2018.

Between now and 2024, European allies and Canada are expected to increase their military spending by $266 billion, bringing NATO’s total military spending to over $1 trillion annually. Germany will bring it to an average of $133 million per day in 2019 and plans to increase it by 80 percent by 2024. Italy has undertaken to increase it from the current $82 million a day to around $117 million a day. This is required by what is defined in the government program as “Italy’s special ally.”

Great symbolic importance is given to the fact that [this NATO Summit] is the first summit convened in the new headquarters of the alliance, which has so far cost 1.3 billion euros or $1.5 billion (but the real price, 7 percent of which is borne by Italy, is still to be established): it’s a structure of over 2.5 million square feet, almost double the size of the previous one, where a permanent staff of about 4,000 military and civilians works, equipped with 18 large halls where more than 5,000 meetings are held annually with an average participation of 500 guests per day. The structure, currently made up of eight major wings and four minor wings connected to a long central body, is of a modular type, therefore expandable as NATO continues to expand.

In 1990, on the eve of the dissolution of the Warsaw Pact, U.S. Secretary of State James Baker assured USSR President Mikhail Gorbachev that “NATO will not extend by a single inch to the East.” (Spiegel online, Nov. 26, 2009) But in 1999, while demolishing the Yugoslav Federation with an air war, NATO included the first three countries of the former Warsaw Pact: Poland, the Czech Republic and Hungary.

After having expanded in 1999-2017 from 16 to 29 members, NATO leaves “the door open” to other entrances: Ukraine and Georgia, formerly part of the USSR, are waiting to enter; Bosnia-Herzegovina and Macedonia, formerly part of the Yugoslav Federation, are two more possibilities. For this reason, NATO has set up an expandable headquarters.