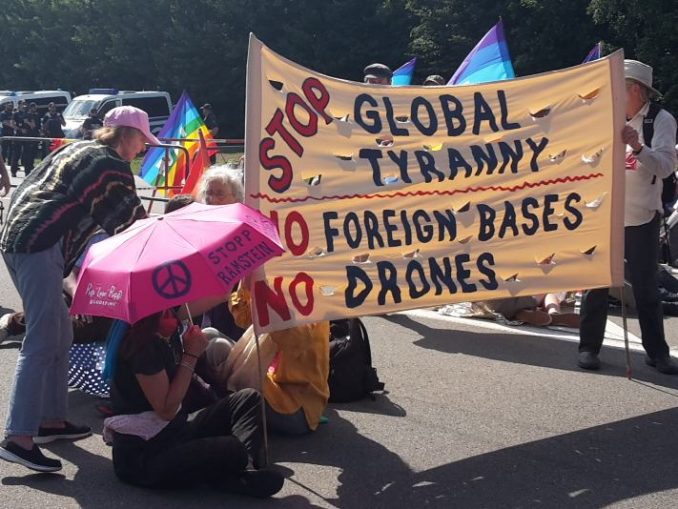 Guilliard is an anti-war activist and analyst living in Heidelberg, Germany.

As the final action of a “Stop Ramstein” protest week against the largest U.S. Air Force base outside the United States, about 2,500 anti-war activists marched to and held a rally at the main gate of Ramstein AFB in Germany. Around 300 activists succeeded in symbolically blocking the access to the main gate for 45 minutes.

“Stop Ramstein” is a nationwide German campaign supported by numerous peace groups, left-wing organizations and individuals. It is directed primarily against the central role the air base plays in the U.S. drone war in the Middle East and Africa.

Among the speakers at the final rally were Sahra Wagenknecht, faction leader of the party Die Linke (The Left Party) in the Bundestag (Lower House), and Ann Wright, a retired U.S. Army colonel and then a U.S. State Department official who publicly resigned in direct protest of the 2003 invasion of Iraq.

The U.S. military uses the relay station in Ramstein for communication with the killer drones, which carry out attacks with no legal due process — what many call “lynch justice” — against people who Washington claims are terror suspects. The drones have already killed thousands of uninvolved civilians in addition to targeted people.

At times, drone attacks have massacred entire wedding parties because the U.S. suspected enemy combatants were among them.

The campaign is also directed against the equally central role played by the huge base in U.S. and NATO’s illegal wars. Operations centers in Afghanistan, Iraq, Libya and Syria have been and are coordinating combat operations by the U.S. Air Force and the armed forces of other NATO states. A significant part of the supplies to operational areas of the U.S. armed forces also pass through the airport.

Although there were half as many demonstrators on the last day as in the two previous years, overall the action week, which culminated in the demonstration, was even more diverse than the previous ones. More than 200 people attended the 40 or so workshops of the four-day “Peace Workshop,” and 600 attended an evening event highlighting the aggressive policies of the Western imperialist states against Russia and the poisonous role of the media.

As in the previous year, activists against foreign military bases from 12 countries — including Pat Elder and Phil Wilayto from the U.S., Giuseppe Firrincieli from Italy, and Hoyhon Choi from South Korea — met to exchange experiences and strengthen international networking for national and regional activities. Around 600 campers organized a large protest camp not far from the air base.

Since the missions of the killer drones are crimes under both German and international law, the “Stop Ramstein” campaign demands that the German government must immediately stop the control of these drones via Ramstein. The demonstrators also demand the closure of the military base.

Under the terms of the contract with the U.S., the German government could simply terminate the contracts on which deployment of the U.S. armed forces is based, after giving two years’ notice.

“Kill orders are arranged at the touch of a button. These are just outrageous crimes! And it is unacceptable that they be supported here, from German soil, in any way!” said Sarah Wagenknecht to the participants at the closing rally.

Referring to the wars against Iraq and Afghanistan, Wagenknecht demanded that in the future there should not be a single German region from which wars of aggression could be fought. Such activity is prohibited by the German Constitution.

“There are over 1,000 U.S. military bases around the world, and none of them exist to ensure the security of those countries,” continued the prominent leftist politician.

The well-known theologian and writer Eugen Drewermann, who spoke after Wagenknecht, reminded the demonstrators that the U.S. military has bombed seven predominantly Muslim countries since 2001. Referring to the German government’s role, he said: “We are involved in these actions, and we are partly responsible. We must finally reject this policy. We Germans have every reason to press the brake, with all our might, to correct old mistakes.”