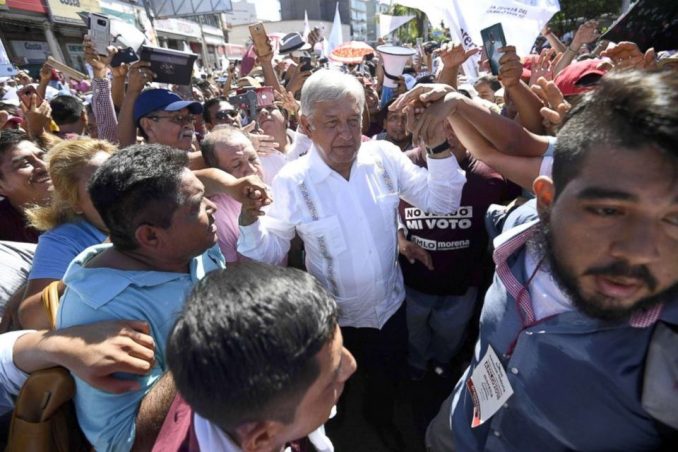 Some 53 percent of Mexicans who went to the polls elected Andrés Manuel López Obrador, popularly known as AMLO, as the next president of this country of 123 million people, the third most populous in the Western Hemisphere.

This landslide victory of AMLO against three other candidates of more right-wing and conservative establishment parties — the Institutional Revolutionary Party (PRI) and the National Action Party (PAN), which together have ruled Mexico over the last 89 years — was the most lopsided electoral victory in Mexican history. His nearest rival got less than half AMLO’s votes.

López Obrador’s electoral coalition is also leading in votes for the lower house of the legislature in five out of nine state governments in play. Plus an AMLO ally, Claudia Sheinbaum, became the first woman elected mayor of vast Mexico City, the capital.

When AMLO’s three rivals conceded on the night of July 1, Mexicans flooded the Zocalo Square in the capital with mass demonstrations to celebrate the victory and demonstrate their great expectations that a new era had begun. They expressed hope that in this new era the Mexican regime would be more sovereign, less repressive and less under the thumb of Washington, while providing more social programs aiding the poor and being free of the corruption that aids only a handful of oligarchs; government, police and military bribe-takers; criminals; and their imperialist contacts across the border.

The election of this more leftist candidate breaks with recent trends in Latin America, which have seen rightist presidents elected in Argentina and Colombia and “judicial coups” depose center-left leaders in Uruguay and Brazil.

When evaluating how much of an “earthquake” the election of AMLO is, it’s good to keep in mind a useful quote from one of the founders of Marxist political theory, Friedrich Engels. In “The Origin of the Family, Private Property and the State,” he wrote: “Universal suffrage is the gauge of the maturity of the working class. It cannot and never will be anything more.”

Whatever the intentions and sincerity of elected officials, and even when these elected individuals are revolutionaries, their role in government still leaves the levers of real power — the army, the police, the justice system and today the media, not to leave out the banks — in the hands of the capitalist class that owns and controls it all.

In Mexico these levers are held by the oligarchy and directly by U.S. imperialism. The Pentagon virtually commands the Mexican army. The FBI and the Drug Enforcement Agency operate throughout Mexico, entwined with and as corrupt as the local authorities. The U.S.-directed “war on drugs” has resulted in 200,000 people killed since 2006.

Only a massive upheaval that breaks apart this state can change social relations. Even carrying out substantial reforms will require mass actions much more powerful than dropping votes into ballot boxes.

López Obrador has never been part of a socialist or communist movement. He is a politician with nationalist roots, harking back to Lázaro Cárdenas, who was president from 1934 to 1940 and promoted local capitalism — as opposed to collaborating with imperialism — while allowing the workers and poor to win some benefits. AMLO was allied with Cuauhtémoc Cárdenas, the son of that historic politician, who narrowly lost a presidential election in 1988 that was rigged against him.

Expelled from the PRI, López Obrador became the first elected mayor of Mexico City in 1997. As a presidential candidate of the Party of the Democratic Revolution (PRD) in 2006, AMLO would have won the election then had it not been stolen from him. In 2012 he lost again. When the PRD drifted rightward, he broke with it.

AMLO ran this year in an ad-hoc coalition called Together We Will Make History (Juntos) consisting of his own party, the Movement for National Regeneration (MORENA) — a party that depended on his popularity without an entrenched structure — and two smaller parties with contradictory programs: the Workers Party (PT), a party with Maoist roots, and the PES, a right-wing party with an evangelical Christian origin that opposes abortion and LGBTQ rights. The alliance with PES might have won some evangelical votes, but it also brought legitimate criticism from activist women and the LGBTQ movement.

Probably the contemporary Latin American politician who AMLO most closely resembles is Lula da Silva of Brazil. Lula’s Workers Party had closer ties to the union movement, however, and Brazil has both a larger economy and larger population than Mexico, and it’s further away from the U.S.

In the course of this year’s elections for president and many local offices, some 130 candidates and political activists were assassinated. While those who pay the death squads were unable to stop the masses from voting for AMLO in the national election — and his supporters made sure that most votes were counted — the killings changed many of the local contests. There are many who fear he may still be targeted in the period between now and Dec. 1, when he is scheduled to take office.

José Humberto Montes Oca Luna, a leader of the combative Union of Electrical Workers of Mexico (SEM), commenting on the possibility of an AMLO election, told Resumen America Latina in a June 23 article: “The mere fact of having a government that does not kill us and persecute us will be a great step forward and will allow the left to reorganize itself, to fill the political vacuum left by the lack of an alternative that can really represent us as the left.”

Mexico is a pluricultural land of many Indigenous nations speaking 89 different languages, with a revolutionary history. The clearest message of the election was to show that, within the range of realistic choices, what most Mexican people want is sovereignty, more social opportunities and benefits for the poor, and less violence and corruption. While the election alone doesn’t bring this, it shows what is possible should the mass of voters become a cohesive force.