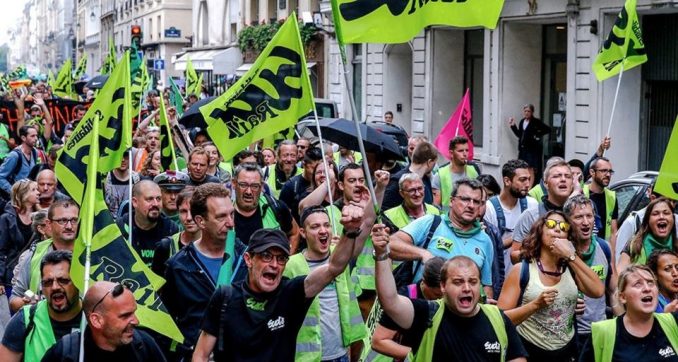 Paris, France — The “reformist” (CFDT) and right-wing (UNSA) union federations officially exited the struggle against the management of the SNCF, the French national railroad company, on June 28. But the combative union confederations, the CGT and Sud-Rail, which between them represent more than 50 percent of railway union members, announced their intent to continue mobilizing together in July — and probably even later in the summer.

Their strategy, however, will change. Since the beginning of April, they have conducted two days of walkouts followed by three days of work, which they call a “off-and-on strike.” Establishing the calendar of strike days well in advance — with two days on strike followed by three back to work — allowed passengers to plan alternate travel solutions. But it also let SNCF management arrange to mitigate the effects of the strike.

So the CGT and Sud-Rail have decided to reveal the dates of work stoppages only a few days ahead of time, targeting them to coincide with the days most people leave for their monthlong summer vacation. The weekend of July 6-7 is the first, followed by an action involving freight trains on July 11.

President Macron’s promises that no jobs would be lost lasted only a few hours. SNCF management has already announced that the company’s freight division will cut 700 jobs by 2021. What is the pretext? They expect the deficit incurred by this branch to be increased “because of” losses caused by the strike! The railway workers, many of whom lost more than 30 days of salary over the last three months, are ultimately being held responsible for these layoffs!

And, shamelessly, the CFDT and UNSA union confederations, after dropping out of the strike movement — as was expected — are begging for crumbs in negotiations with the company’s human resource department over the new “collective agreement for rail transport” that is to replace the abandoned law regulating conditions for railway workers. As the saying goes, “When the bosses decide to restore slavery, the ‘reformists’ will negotiate with their masters over the size of the slaves’ chains.” …

At the same time, another large-scale mobilization is developing, also historic in its strength, determination and duration. Energy workers have been fighting for over ten weeks in a very dynamic and massive strike led by young workers, which started in Marseille. At the call of the CGT energy federation, electricians and gas workers moved into action, cooperating with and supporting the railway workers’ strike, with quite similar demands but specific to their sector, in a spirit of solidarity to defend public services.

Since mid-June, this mobilization has been growing. It includes workers at Enedis, a subsidiary of Électricité de France (EDF), the leading electricity supplier in Europe; and Gaz Réseau Distribution France (GRDF), a subsidiary of Engie (formerly GDF Suez), the main distributor of natural gas in Europe. By the end of June, workers had blocked nearly 300 worksites and occupied more than half of them.

These strikes were at first “off-and-on” before becoming extended and even unlimited, making this mobilization the largest strike in the French energy sector in the last ten years. The atmosphere at the strike sites is often welcoming and family-like, reforging broad bonds of local solidarity.

Infuriated by the astronomical dividends paid to private shareholders, the strikers are on the offensive. They are demanding wage increases of at least 400 euros ($464) per month, permanent hiring of colleagues currently on fixed-term or temporary contracts, cancellation of scheduled job cuts, return of outsourced work and nationalization of the energy sector to make it a true benefit for public service consumers — and not for the capitalists.

This strike is the culmination of the numerous powerful struggles led by electricians and gas workers over the past two years, which included the “days of anger” organized over several months in early 2017. Given the scale of the rebellion, the big-business media are imposing a total censorship of information. The frightened employers and government are impatiently awaiting the start of the summer vacation period, when they assume the struggles will run out of steam.

Terrified at the risk that the struggle will spread, the ruling class is counting on the fragmentation of the workforce that has resulted from years of privatization and the dismemberment of the public sector. Bonuses for employees who stay on the job are even being discussed in the nuclear and high voltage lines sectors. … What will happen when vacationers return, when the people’s anger against Macron is renewed, and when the hope of change is reborn?