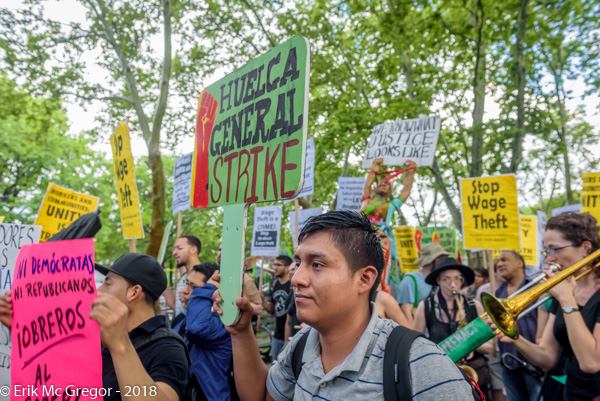 The Laundry Workers Center launched a new campaign on June 28 against the exploitation, marginalization and unsafe working conditions of New York City’s predominantly Latinx, immigrant laundromat workers, with a successful protest and walk-in at an East Harlem laundromat.

“The Laundromat Campaign is a multifaceted, women-led campaign to transform the retail laundromat industry for the better,” states the center’s website.

Joined by supporters and accompanied by the Rude Mechanical Orchestra, the LWC led a march of about 50 protesters through pouring rain and into a large laundromat on East 116th Street. There, laundromat workers spoke, the LWC presented the workers’ demands — and the owner’s son agreed they would abide by the law.

“For many years the employer has allegedly violated the rights of workers,” read the LWC’s campaign leaflet. “After nine months of organizing and training, the laundromat workers in Harlem have decided to stop exploitation and abuse in their workplace.”

Employer violations include not paying the minimum wage or overtime, paying salaries monthly, making illegal salary deductions, discrimination, long hours with no breaks, failure to provide safety masks or gloves, and forcing workers to buy their own toilet paper.

The facts on working conditions

The successful action came just two days after the LWC issued its groundbreaking “Report on Working Conditions in the Retail Laundromat Industry: New York City 2018.” The report is available online in English and Spanish at tinyurl.com/yd7dzpx7.

Since 2012, the LWC has recovered $2 million in back wages from unscrupulous employers. The center has organized migrant workers who face harassment, low pay, and unsafe, unhealthy workplace conditions. The LWC has fought for a New York and New Jersey minimum wage and other laws to uplift these low-wage workers.

The LWC’s new report continues this effort, summarizing three years of work by trained LWC members and organizers who logged observations at 100 laundromats throughout New York City and administered 99 surveys about working conditions in English and Spanish to workers at 78 unique retail laundromats.

Who are the laundromat workers?

“We also found there are many Asian workers,” said LWC Organizing Coordinator Rosanna Rodriguez at the June 26 release of the report, hosted by the Worker Institute of Cornell University’s School of Industrial and Labor Relations. She indicated the LWC would be looking to reach out to them as well.

A pattern of employer violations

LWC members gathered important information about where and how laundromat workers do their jobs by looking at the physical workplace (size and services offered) and evaluating workplace responsibilities (washing/drying/folding clothes, cleaning and customer service).

They also documented apparent employer wage-and-hour violations. Seventy-seven percent of surveyed workers work more than 30 hours per week. Yet 1 in 5 who reported an hourly wage make only $10 per hour or less (a violation of New York state’s minimum wage law), with only 3 percent earning more than $12 per hour.

Thirty-six percent of surveyed workers indicated they were underpaid, or not paid at all, for overtime work. Thirty-one percent said they received neither sick time nor other time off, 15 percent reported they are not allowed to take breaks, and 78 percent said there was no breakroom.

Harassment and other hazards

“Our research finds that laundromat workers are subjected to high levels of harassment, with more than half of workers (54 percent) reporting some form of harassment,” the report states.

The majority of workers (86 percent) identified customers as the source of the offensive conduct, which is not uncommon in other service industries. That includes insults or put-downs (44 percent), racial slurs (25 percent), offensive jokes (23 percent), threats or intimidation (16 percent), physical assaults and sexual harassment (6 percent) or other harassing conduct (2 percent).

In addition, 99 percent of workers reported exposure to at least one workplace hazard such as bleach and other chemicals, soiled clothing, repetitive movements, heavy lifting, and slippery or hazardous floors. As a result, respondents reported work-related muscle pain (54 percent), allergies (27 percent), skin conditions (21 percent), emotional and mental health challenges (16 percent), respiratory problems (12 percent) and other issues (10 percent) such as bed bugs, cuts and burns, and hair falling out.

A call to action

“Laundromat workers know best what they need to create a safe, equitable work environment,” says the Call to Action at the end of the LWC report.

Among recommendations for laundromat workers are safety and health training on workplace hazards, free employer-provided protective gear, workplace safety plans and violence prevention programs, and ergonomic workspaces to prevent physical injuries. Above all: Organizing! “In 1881, African-American laundresses organized a strike of 3,000 workers and won a wage increase, and we can organize the same way,” said Rodriguez.