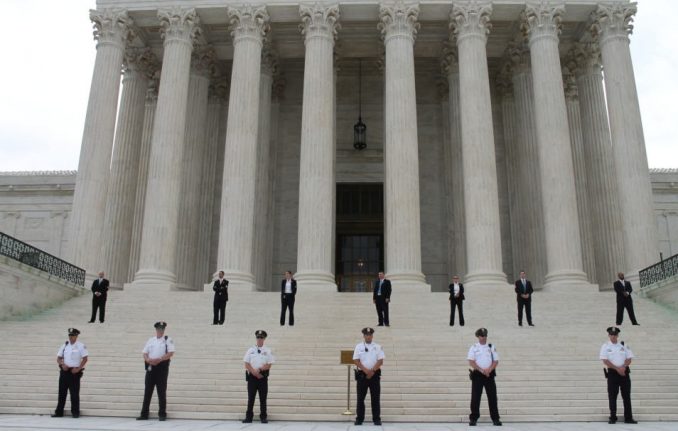 Every kid who attends school in the United States is taught that the Supreme Court is one of the pillars of democracy, part of the system of “checks and balances” regulating the presidency and Congress.

Trouble is, like the racist fable of the “first Thanksgiving,” it’s pure myth.

In reality, the Supreme Court is a supremely undemocratic institution — its unelected members appointed for life, tasked with defending the interests of the minuscule class of big capitalist owners of high finance and industry from any challenge to their rule over the vast majority.

The U.S. Supreme Court has been doing its job with a vengeance lately. In the last week of June, it upheld Donald Trump’s racist ban on travel from five Muslim-majority and two anti-imperialist countries, Venezuela and the Democratic People’s Republic of Korea. It gave its blessing to anti-abortion “counseling services” posing as reproductive rights clinics which lie to women. And it sided with bosses in the Janus case, striking a heavy blow against public employee unions and the whole labor movement.

At the end of the court’s term on June 27, longtime Justice Anthony Kennedy announced his imminent retirement, thus opening the court for a replacement while Republicans have a majority of both houses of Congress. Coming after the string of attacks on workers and oppressed people, Kennedy’s announcement deeply alarmed many progressives, who fear Trump’s next pick will give the Supreme Court an unbeatable ultra-right majority.

Kennedy seems an unlikely object for progressive mourning. A Reagan appointee, he put forth right-wing, racist and anti-worker positions over the years. As the Supreme Court and the U.S. political establishment shifted dramatically to the right after his 1988 appointment, Kennedy at times appeared more moderate, compared to the ultra-right headed by Chief Justice John Roberts. But though he sided with the more liberal wing of the court in defending baseline reproductive rights and upholding the right of same-sex marriage, Kennedy continued to help whittle away at people’s basic rights on many fronts.

The panic accompanying Kennedy’s retirement shows a fundamental misunderstanding of the court and its role as an institution defending the capitalist system and the billionaire ruling class.

Ultimately, it’s not who sits on the court that matters most. It’s the state of the class struggle.

When the workers and oppressed are on the move and fighting back, the Supreme Court can be forced to grant concessions — sometimes substantial ones — regardless of who sits on it.

That was the case when the court, faced with a rising fightback movement of African-American people, ordered desegregation of schools in Brown v. Board of Education in 1954, during the depths of the Cold War anti-communism.

In 1973, a Supreme Court stacked with reactionary Republican appointees was forced to recognize women’s right to choose in the historic Roe v. Wade decision legalizing abortion. That victory was won by the rising women’s liberation movement and its allies in the Black, Puerto Rican, Chicano, LGBTQ, anti-war and other movements.

Many workers and oppressed people are understandably worried by the prospect of a Trump Supreme Court appointment. But history shows that the answer is not panic, or desperate pleading with Democrats to bargain for a “lesser-evil” reactionary appointee acceptable to all ruling-class factions.

The answer is to build a militant, independent struggle to defend im/migrants, the movement for Black Lives, women’s and LGBTQ people’s rights, and the rights of all workers.

Or as labor martyr Joe Hill — a victim of the Utah version of the Supreme Court — told fellow workers before his execution in 1915: “Don’t mourn — organize!”