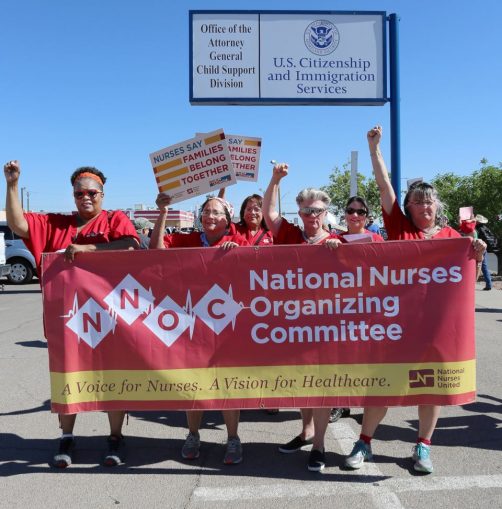 The terrorist tactics of Immigration and Customs Enforcement come from the top, but can be disrupted in the workplace, especially if unions put muscle into the fight against raids and deportations. Recent examples are presented below, by industry, to get readers thinking about what more can be done.

Flight attendant Hunt Palmquist announced via the Houston Chronicle on June 19 that after witnessing ICE agents taking migrant children to “relocation” in Texas by plane, he decided to never work another flight that separates families. Palmquist vowed to “immediately remove myself from the trip due to the nature of this unconscionable act by my government, and my employer’s complicity.” He added, “I have told my story to many of my flight attendant colleagues and they have pledged to do the same.”

The next morning, major U.S. airlines — American, United and Frontier — each released statements and tweets distancing themselves from the practice. American Airlines “requested the federal government to immediately refrain” from using its planes to transport separated children. Were they afraid of “optics” or of a job action by their unionized workforces?

Amalgamated Transit Union Local 1700 represents Greyhound bus drivers. The local shares articles such as “Greyhound Should Just Say No to the Border Patrol’s Bus Sweeps” on its social media.

On June 19, Microsoft workers put out an open letter against the corporation’s $19.4-million cloud computing contract with ICE, saying, “As the people who build the technologies that Microsoft profits from, we refuse to be complicit.” By the middle of June 21, there were 300 employee signatures. Coverage of this incident said various employees were considering leaving the company. (tinyurl.com/yc9fvfwy)

After ICE attacked and detained 140 of 2,800 workers represented by the Retail Warehouse and Department Store Union on June 19 at Ohio Fresh Mark plants, the national union funded legal and financial aid for the family members of those workers.

The plants had recently been denounced for Occupational Safety and Health violations. (tinyurl.com/y9hrhe6p)

Painters Local 456 launched Alianza Laboral Worker Resource Center in the southeast Nashville, Tenn., Latinx community, to reach im/migrant workers who otherwise face abusive tactics like wage theft. Among the workplace hazards about which the center holds trainings are ICE raids. According to organizer Rosa Ponce, employers can deny entrance to agents lacking a warrant, “but the general contractor is not going to refuse to let ICE in unless we’re organizing and having these conversations with the boss.” (tinyurl.com/yagax6ds)

Castillo cites NNU board member Martese Chism, who went from Chicago to protest in El Paso, saying, “I felt compelled to come here … because today is June 19, the day that Texas freed the slaves, and so I’m here to tell [our government] to do the right thing and free the children.”

Castillo adds that “NNU’s RN Response Network disaster relief program — for volunteers to be on standby for providing first aid to detained immigrant children and families — netted over 900 sign-ups in just a few days.”

These union nurses are alerting the medical field that the trauma of separation, on top of war and violence experienced in home countries and during the journey to these borders, is a long-term public health crisis. (tinyurl.com/ycf7djhx)

Many Fight for $15 formations and unions — International Longshore Association, Service Employees International Union 1199 Healthcare Workers and 32BJ SEIU, for instance — are engaged with the new Poor People’s Campaign, which marched on Washington on June 23. Speakers there added the crimes of ICE to their list of injustices that Martin Luther King Jr. called out 50 years ago: racism, capitalism and militarism. Twitter footage of the march that day shows working-class crowds chanting, “Rise up my people, my condors and eagles! No human being will ever be illegal!” Condors and eagles refer to the Indigenous cultures of South, Central and North America.

The fact that working people — in industries capable of servicing ICE logistically, industries which employ many migrants and others — are openly opposing the racist “zero tolerance” program provides hope that we can ultimately organize to withhold our labor on a mass scale and stop ICE.

Catalinotto is a member of the Workers World Party Labor Fraction.