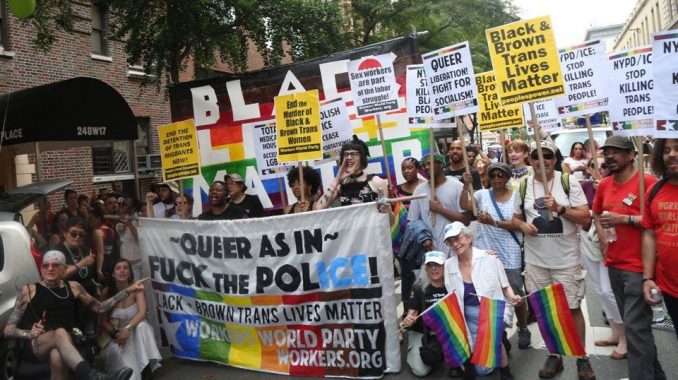 New York — The LGBTQ Pride Parade in this city exists to celebrate and advance the fight for LGBTQ liberation. That is why we fight against corporatization of the march and against police being in Pride.

But on June 24, this year’s Pride, the corporations and the police continued their attempt to co-opt and pink-wash the movement, while repressing young Black and Brown LGBTQ folks. Heritage of Pride, the group that organizes Pride, continues to work with the New York Police Department, the same NYPD that has never stopped harassing, beating and killing LGBTQ folks. This year HOP added several more repressive components to the parade.

First, HOP changed the course of the route, ending the march on 30th Street, and cut off the last three blocks on Christopher Street that are filled with Black and Brown LGBTQ youth every year! Also, HOP restricted the number of individuals in a contingent to 200 members and added the requirement that everyone in the parade had to have a wristband — a disgusting marker they wanted specially oppressed people to wear.

All these measures were to allow HOP to test how to control Pride next year, 2019, the 50th anniversary of the Stonewall Rebellion. It was a test run before further restricting Pride in order to maximize tourist profits.

Workers World Party wasn’t going to let this go by unchallenged. WWP, along with the People’s Power Assembly, joined the Reclaim Pride Coalition, and raised the issue of support for Black Lives Matter and for abolition of police and ICE in the coalition. Reclaim Pride original members include the NYC Democratic Socialists Queer Caucus, ACT UP New York, and Rise and Resist.

As many people gathered at the Reclaim Pride resistance contingent meeting spot, some were engaging in a separate action, an anti-wristband march. Individuals in the coalition planned to march into the meeting area with no wristbands.

Minutes before this march was to take place, HOP rescinded its wristband requirements — only for the resistance coalition. However, barricades were still set up at the entrance for the coalition. HOP members planned to check individuals for which group they were with before letting people into the march. However, they could still have lied to people about needing wristbands.

After achieving the victory of pushing HOP back, Reclaim Pride people still wanted “no wristbands” for everyone in the parade, so the anti-wristband action went forward. Marchers arrived chanting, raising the energy of everyone gathered there, and then the resisters took apart and moved the barricades! Because of this action, hundreds of people were able to move into the waiting area with no need for wristbands.

Our Reclaim Pride contingent was made up of WWP comrades, members of PPA and NYC Shut It Down, dancers and their friends. Signs connected LGBTQ liberation, sex workers’ rights, the im/migration struggle, Black Lives Matter, and the abolition of police and Immigration and Customs Enforcement. In particular, signs honored Roxana Hernández, a Black trans woman from Honduras who died in ICE custody. A Black Lives Matter banner featured a rainbow Pride flag with the addition of the colors black and brown. The Workers World Party banner read:  “Queer As In/ Fuck The Pol(ICE)/Black and Brown Trans Lives Matter.”

The contingent entered the parade with our banners flying and signs held high, accompanied by the young Black dancers of Left Our Mark who have been part of WWP Pride contingents for the past two years. An accompanying van blared music that could be heard a block away. Marchers distributed over a thousand Workers World newspapers, along with hundreds of flyers for the PPA July 13 rally in memory of Sandra Bland. She was the young African-American woman who died in police custody in 2015, sparking the #SayHerName movement.

Contingent marchers assisted Black and Brown youth who wanted to join us in jumping the barricades — right in front of the cops. As the dancers entered a routine, or as the militant banners passed by, loud cheers erupted. The contingent size grew to over 400 people, predominantly Black and Brown youth. We were a moving dance party set to the rhythm of liberation! We were creating a true Pride parade!

Pride is not for the corporations.  It is not for the police to tell LGBTQ people where, when and how we can celebrate. Everyone should be allowed into Pride to join the fight to abolish the police, abolish ICE and  achieve LGBTQ liberation.