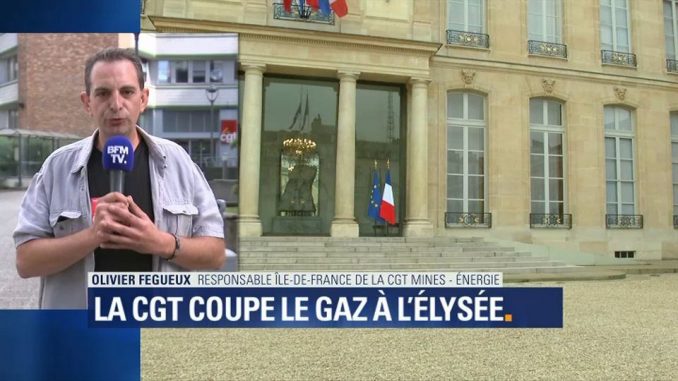 French TV reports on CGT demanding cutoff of gas to the French president’s residence. Earlier the workers cut power off as the prime minister was speaking.

Paris, June 25 — During the conflict at the French national railway (SNCF), President Emmanuel Macron has argued that the “reform” he has imposed, for which the French Parliament has already passed implementing legislation, will not lead to privatization of the rail sector.

But the Minister of Economy and Finance, Bruno Le Maire (previously minister under Nicolas Sarkozy), has introduced legislation (which he calls a “Pact”) that amounts to a privatization program under the guise of helping small and medium-sized businesses and reducing government debt.

This new legislation would transfer state-owned shares of ADP (the company that manages Paris-Charles-de-Gaulle and Orly airports, number one in Europe for freight and mail), ENGIE (formerly GDF-Suez, the third largest non-oil energy group in the world) and La Française des Jeux (lotteries and sports betting) to the private sector. The state’s stock sale would also affect Air France (where the unions remain mobilized in an unresolved labor conflict), Orange (telecommunications) and the automobile industry (Peugeot, Renault).

How far will the neoliberals manage to erode state control of these industries, especially with people distracted by the 2018 FIFA World Cup, an event that provides a maximum dose of the “opium of the people”?

This government offensive comes at a time when the right-wing (UNSA) and reformist (CFDT) union confederations are breaking up trade union unity, and the most combative unions (CGT, SUD-Rail) have announced they will continue the strike this summer, when over 60 percent of the population goes on holiday.

The workers’ counterattack was not long in coming. Nearly 150 workplaces were occupied by electricians and gas company employees on June 14 — proving that even if you love soccer’s World Cup, you can still get passionate about class struggle. In many offices where workers had gathered to hear management’s rationales for privatizing energy, they saw the bosses lower their heads without saying a word, barricade themselves in their offices or run away!

Union members occupied more than 220 sites on June 21. Here and there, in the middle of entrance halls, strikers in bathing suits installed inflatable swimming pools and soaked in comfort while waiting for their children to be invited to do the same on the weekend! This reminded people of the historic Popular Front strikes in 1936 when workers played pingpong in occupied factories.

Meanwhile, Macron’s lackeys announced his plan to build a new private swimming pool in Brégançon, the presidential holiday resort on the French Riviera — at taxpayers’ expense. And that the presidential couple has decided to replace the china dishware at the Elysée Palace (the presidential residence) for 500,000 euros, or close to $600,000!

On the same day, a video circulated on the internet showed the president declaring that a “wild amount of money” is spent on social needs. Are we to understand that Macron’s next demolition project will seek to cut public expenditures that reduce poverty (income and social benefits for poor households, income floors for the elderly, housing allowances, etc.)?

That would be a big blow against the workers. A recent official report indicates that the number of poor children is exploding: nearly 20 percent of French children now live below the poverty line. They come mainly from single-parent families and/or unemployed families.

The government says that unemployment is falling. In fact, the requirements to obtain unemployment benefits have become so onerous that many unemployed people are no longer counted or included in the statistics. What does this mean for the government? It just laid off 4,000 employees of the public agency, Pôle emploi, responsible for helping the unemployed find a job!

They will join the thousands of laid-off Carrefour employees — 2,500 announced job cuts — who learned on June 15 that the shareholders’ meeting of this giant retail company (third biggest worldwide, Walmart being first) had awarded its CEO a departure bonus of 13 million euros and an annual pension of over half a million euros as reward for his management.

How long will these predatory and cynical officers and directors, supported by the government, be allowed to continue their systematic destruction and looting?

Recent actions indicate not for long. On June 21, the CGT Mines-Energie Federation demanded that the gas supply to the Élysée Palace be cut off, as happens to millions of French households. A few days earlier, near Toulouse, Prime Minister Édouard Philippe was forced to make a speech in the dark and without a microphone because of a power cut organized by the CGT.

Herrera is a Marxist economist, a researcher at the Centre National Recherche Scientifique, who works at the Centre d’Économie de la Sorbonne, Paris. WW staff translated this article.