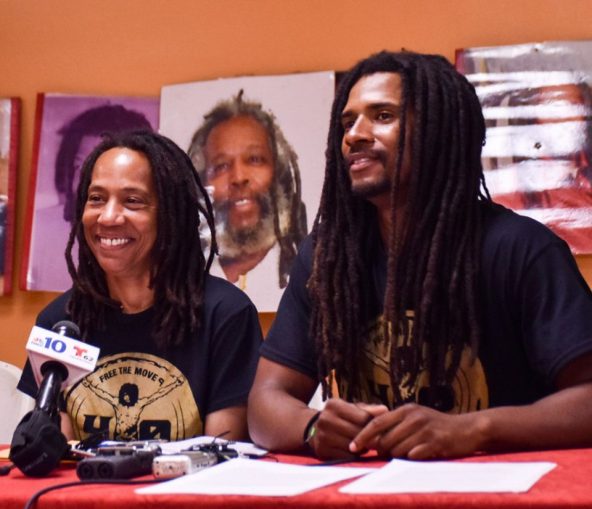 East Lansdowne, Pa. — At a press conference in East Lansdowne, Pa., on June 19, MOVE 9 member Debbie Sims Africa made her first public appearance since being released from prison after nearly 40 years of incarceration.  She had been imprisoned since Aug. 8, 1978, following the Philadelphia police attack on the MOVE Organization.

Sims Africa was one of nine MOVE members, collectively known as the “MOVE 9,” who were convicted and sentenced to 30 to 100 years in prison following the altercation.  She was eight months pregnant at the time and gave birth in jail to her son, Mike Africa Jr. She has been incarcerated for his entire life. Mother and son spent time together outside of prison for the first time on June 16, following her release.

Flanked by her son and her attorney, Brad Thomson, Sims Africa said at the press conference: “I have not yet caught up with my emotions on how happy it makes me to see my family and to be united with my son for the first time in all those years.  As happy as I was to be with my family, it is a bittersweet victory for me because my sisters Janet, Janine and the rest of the MOVE 9 are still in prison in the same situation that I was in. They deserve parole, too.”

Mike Africa Jr. echoed this sentiment: “After being born in jail and never being with my mom or dad, I’m happy to be with my mom at home for the first time ever in almost 40 years. But my family is still incomplete because my dad is still in prison. The MOVE Organization has experienced so much hate and anger from the system that this is a victory, yet 40 years of separation is not over for our family.”

Mike Africa Sr., one of the MOVE 9 still in prison, is scheduled to appear before the Pennsylvania Board of Probation and Parole (PBPP) in September.  Janet and Janine Africa’s next parole opportunity is in May 2019. Three other members of the MOVE 9 remain incarcerated. Two died in custody.

Thomson, an attorney with the Peoples’ Law Office, represented Sims Africa throughout her parole proceedings.  He noted: “This is an historic moment for Debbie, her family and the MOVE Organization. We consider this a big, important step towards freeing all of the MOVE 9.”

Janet and Janine Africa appeared before the parole board on the same day as Sims Africa, but they were denied parole.  Thomson said it was hard to understand the board’s rationale for not releasing the other two women, given that each has maintained Department of Corrections records as exemplary as and nearly identical to that of Sims Africa.

Thomson said: “Based on statutes regarding parole in Pennsylvania, the board made the correct decision with Debbie, but they should have made the same ruling for Janet and Janine. The facts in all three cases and other members of MOVE 9 show that none of them should have been convicted in the first place.  There is no rational basis for keeping them incarcerated.”

All MOVE 9 members have been eligible for parole since 2008; each has gone through numerous hearings.  Sims Africa’s May 10 hearing was her ninth.

Carolyn Engel Temin, the Philadelphia district attorney’s office first assistant, wrote letters to Leo Dunn, PBPP chairperson, on behalf of DA Larry Krasner, saying that she was “confident” that Janet and Janine Africa “will not pose a threat to the Philadelphia community,” and that their “continued incarceration does not make our city safer.” However, the PBPP lied, claiming the “negative recommendation of the prosecuting attorney” was a basis for denial. (onamove.com, June 19)

Thomson asserted: “We are hoping that moving forward we will be able to win release for the remaining six people.”  When asked about the impact of calls on their behalf to the PBPP, he replied, “It is important that the parole board recognize that Debbie and the rest have people who support them, [and] that they are not a threat to the community.”

When asked how the state’s bombing of the MOVE house and murder of 11 MOVE members on May 13, 1985, affected imprisoned MOVE members, Sims Africa recounted their profound disbelief when prison guards told them about the attack, refusing to accept that it had happened.

Mike Africa Jr. said that Janet and Janine Africa had children who died in that fire. Now, the same state that killed their children refuses to grant the mothers parole. He read Janet Africa’s letter about Sims Africa’s release:  “Everybody here, especially the lifers and long termers are lifted and motivated by Debbie leaving. Tell her she took a piece of our heart when she left, but it balances out because she left a piece of hers with us.”

Events in Philadelphia will mark the 40th anniversary of the Aug. 8, 1978, police attack on MOVE.  See onamove.com for information about the Aug. 5 Day of Resistance for the MOVE 9.