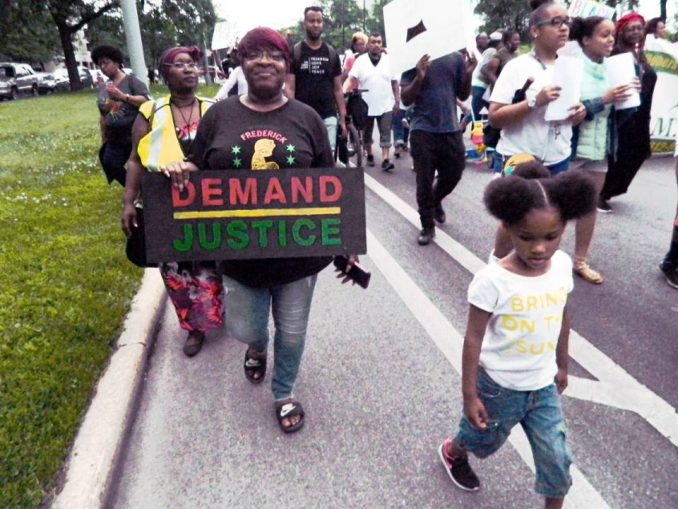 Chicagoans of all ages march to demand protection and empowerment for Black women and girls.

Chicago — As school let out for the summer on June 19, a small crowd gathered on King Drive on Chicago’s South Side to express their grief and outrage in the wake of mounting awareness that at least five Black women and teenage girls have been missing since March.  These disappearances have occurred within a 2.5-mile radius of each other on the city’s poor, working-class South and West sides. Two of them have been found dead.

Though the news of the missing women has spread quickly among neighbors and through social media, the police have not issued any Amber Alerts for the missing minors. The Chicago Police Department has consistently been dismissive of community leaders’ growing concerns that the disappearance of the victims could be connected.

Instead, friends and families who are desperate to find their loved ones have posted fliers around their neighborhoods. One family described how they combed their block looking for the body of their missing neighbor in dumpsters and underneath cars.

In the face of very little media coverage or follow-through from police, 13-year-old Aziyah Roberts, of the Kenwood Oakland Community Organization, took matters into her own hands. In less than a week, Roberts and other youth organizers mobilized their communities to demonstrate at a Walk For Her March.  They marched for 20 blocks down King Drive, demanding a response to the crisis from city officials.

The crowd grew as it progressed south, chanting “Stop and listen! Our girls are missing!” They drew supportive neighbors out of their homes and into the street. High school student Miracle Boyd told the marchers, “If no one’s looking out for our Black girls, we’ll protect ourselves.” Other organizers took the megaphone to exhort the crowd to “say her name,” repeating the names of the missing: Shantieya Smith, Victoria Garret, Sadaria Davis, Yasminda Mitchell and Daisy Hayes.

A constant theme at the march was a refusal to be defeated. Neighbors pledged to protect and empower each other, many drawing direct connections between the plight of the missing women and a larger, systemic scourge of domestic violence, sexual assault and misogyny. They vowed to renew commitments to ending violence against women.

Older activists beamed as they watched the youth organizers lead the demonstration. Tish Taylor, a longtime member of the Coalition of Black Trade Unionists, knew she had to be there. “This child is lighting the way.  What she needs is for us to show her the support of her elders,” Taylor told this writer as Roberts took the megaphone.

The march ended with a picnic outside Dyett High School. Though clearly energized and uplifted by the encouraging mood around her, Roberts became solemn when asked about her first reaction to news of the missing women and girls: “I had to do something because I’m a Black girl too, and it could have been me. It could have been anyone. … But looking at all these people, I’m excited, and I know I’m not going to stop. I have a home.  I have people I can go to, and we’re not going to stop.”

Police Superintendent Eddie Johnson had attempted to minimize these tragedies by suggesting that two victims were “involved with drugs and prostitution.” (CBS Chicago, June 13)  But the Rev. Robin Hood, who has been assisting some of the victims’ families in dealing with the police, commented to the TV station, “If it were any place else in the state of Illinois where it was predominately white or rich people, you would have a dragnet looking for people.”

The capitalist state’s refusal to meaningfully address this outrage to the Black community shows why it should be replaced by a state controlled by workers and the oppressed.