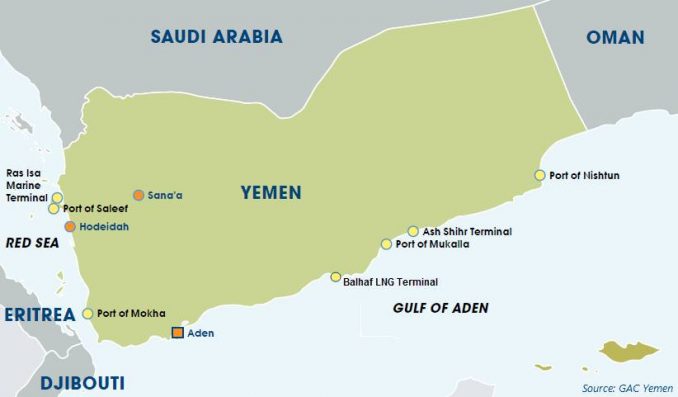 With U.S. logistical and intelligence aid, the Saudi Arabia-United Arab Emirates coalition of reactionary monarchies in the Persian/Arabian Gulf region has been waging an offensive, including Saudi air strikes, on the Yemen port city of Hodeidah. Because Hodeidah is the main entry for food aid, the offensive threatens the lives of as many as 8.5 million of Yemen’s 29 million people.

As of June 17 the battle for the port was still raging. The reactionaries’ claims to have taken the airport were refuted both by the defending forces and international observers, according to an article in the June 18 German daily newspaper Junge Welt.

The corporate media describe the troops defending the port as “rebels.” This term is misleading, as these troops are from the Ansarollah-led government that has controlled the city since soon after the prior interim president, Abed Rabbo Mansur Hadi, fled Yemen for Saudi Arabia in 2014. Hadi had been elected in 2012 for a two-year term under an agreement of contending groups in Yemen. He was rejected when he broke that agreement.

Ansarollah came out ahead in the ensuing struggle for power inside Yemen. Demonstrations of hundreds of thousands of people have supported the Ansarollah government, who are also called “Houthis.”

The same media call the 21,000 troops attacking the port “government troops.” These forces, however, are made up of officers from the United Arab Emirates and troops recruited from opponents of the Ansorallah made up of separatist militias, fortified by mercenaries from Sudan.

The reactionary coalition, which first attacked Yemen in March 2015, also included Egypt and Jordan, although there are no reports of troops from these countries participating in the assault on Hodeidah. The coalition’s main pretext for fighting against the Ansarollah forces — and the U.S. pretext for arming the coalition and fueling Saudi planes in the air — is the alleged role of the Iranian government in supporting Ansarollah.

While it is reasonable to assume that the Iranian government — as the only state power in the region independent of world imperialism — would be sympathetic to the mostly Shiite and also anti-imperialist, anti-monarchist Ansarollah movement, there is no direct intervention by Iranian forces in Yemen and no hard evidence of a massive supply of weapons to Ansarollah. The international agencies that administer aid through the Hodeidah port say that they would have seen any supply of Iranian rockets through the port.

The other side, that is, the Saudi-UAE coalition backed by U.S. imperialism, represents the most reactionary states in the region. Coalition ruling classes are completely entwined with world imperialism and act against any popular movements of the masses. The Saudi and UAE monarchies dominate the air, supply officers and hire mercenary troops, while the U.S. provides them with weapons of the highest technology.

The humanitarian crisis in Yemen, which has suffered from a cholera epidemic and where tens of millions of people are on the edge of starvation, threatens to lead to millions of deaths if Hodeidah is closed to aid shipments.

The Saudi bombing of Yemen began in 2015, with the backing of the Barack Obama administration. The Donald Trump administration, whose senior positions are filled with sworn enemies of Iran, like John Bolton, Mike Pompeo and Trump himself, has sold $110 billion in weapons to Saudi Arabia and is looking to sell more.

A nervous June 12 editorial in the New York Times opposed an assault on Hodeidah. While it avoided criticizing Obama’s decision or the overall imperialist goal of defeating Ansarollah, it argued: “Over the course of this conflict, President Trump has emboldened Saudi and emirati leaders. He shares their antipathy for Iran and will sell them virtually any weapon they want. The military contractor Raytheon is lobbying Congress and the State Department for permission to sell the Saudis and emiratis billions more dollars’ worth of precision-guided munitions.”

The Times spelled out its fears: “Although coalition leaders have argued that the offensive can be carried out quickly, they have repeatedly miscalculated over the years, trapping their countries in a quagmire. The result has been countless civilian deaths, many attributed to indiscriminate coalition bombing attacks. Under international law, these attacks may qualify as war crimes in which the United States and Britain, another arms supplier, are complicit.”

The New York Times published a report May 3 that the Pentagon has stationed a unit of Green Berets in Saudi Arabia on the Yemen border.

The possibility then is that the U.S. will not only wind up involved in obvious war crimes — which in Yemen would amount to genocide — but that the mercenary forces it backs will face defeat by a popular army. The presence of U.S. Special Forces means that this opening toward a greater conflagration in the region could find U.S. forces in a direct battle with a people’s war.