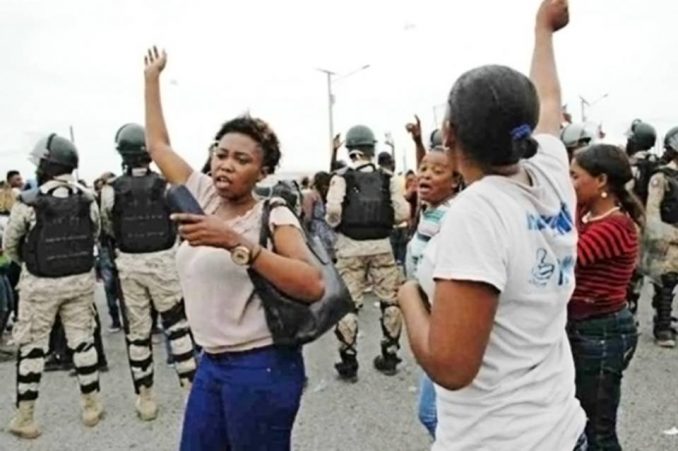 For over a year, workers in Haiti’s needle trades have been organizing, protesting and striking to raise their daily minimum wage from $4.75 to $15. The textile industry supplies 90 percent of Haiti’s exports.

When hundreds of workers tried to walk out at the SONAPI Industrial Park (SONAPI is the French initials for the National Society of Industrial Parks) on June 11 to present their demands to Parliament, special riot police attacked them with clubs and sent dozens of workers to the hospital. (Haiti Libre, June 12)

Workers had applied for and received a permit to march, but Bernard Schettini, the government-appointed director of SONAPI, called out the riot cops.

Workers are demanding a raise in pay and also the public transportation, health insurance and public housing that the government has promised. Due to government-imposed price hikes of 20 percent on gasoline, inflation has been raging in Haiti.

Many categories of Haitian workers get a legal, daily subminimum wage of far less than $4.75. According to the Minimum Wage Project, 107 countries have a higher average yearly minimum wage than Haiti.

There are six companies in Haiti that produce garments for U.S. stores like Walmart and Target: MGA Haiti, Astro Carton d’Haiti, Haiti Cheung Won, Textile Youm Kwang, Pacific Sports Haiti and Wilbes Haitian. They have all threatened to leave for countries where the workers are “less demanding” if the government fails to stop these strikes, which have had a major impact on production.

The head of the Association of Industries in Haiti, Georges Barreau Sassine, announced that 800 workers were going to be laid off by Wilbes, a South Korean firm. The rationale is that Wilbes couldn’t meet its obligations to Under Armour — a prominent U.S. firm that sells footwear, sports and casual apparel — due to worker unrest in May. This is a very serious threat in a country where some economists estimate the unemployment rate is 75 percent.

Dominique Saint Eloi, the coordinator of the National Center of Haitian Workers, had to announce the cancellation of the last two days of workers’ protests due to police brutality. But he made it clear that there will be further protests in the future.