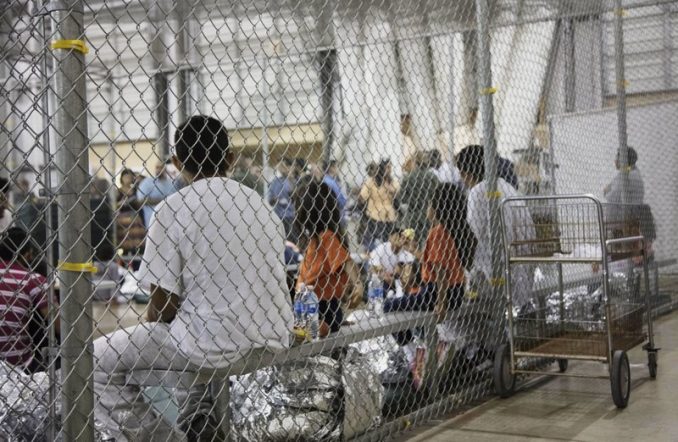 Pictures on social media and television of children in Immigration and Customs Enforcement detention are now horrifying millions of people in the United States and around the world. Since Donald Trump’s cruel and racist edict to separate migrant families when they arrive at the U.S. border, which went into force in mid-April, more than 2,000 children have been ripped from the arms of their parents and whisked away to destinations unknown, all within the last two months.

Some were even taken away from their parents on the pretext of being given “showers,” echoing a tactic used by Nazis during the genocide of Jews, oppressed nations and others in Europe in the late 1930s and 1940s.

Some of the photos of bereft migrants on social media were actually from the Barack Obama presidency. Widely called the “Deporter in Chief” by the im/migrant rights movement, Obama’s tenure saw more people deported than during the combined terms of all U.S. presidents in the 20th century. At least 2.5 million deportations in just eight years!

Obama laid the administrative and logistical groundwork for Trump’s onslaught on migrants. When Obama signed an executive order that directed the federal government to cease working with the for-profit prison-industrial complex, he notably left out ICE and Department of Homeland Security prisons, which are more than 60 percent privately run.

But when Trump came into the presidency, he famously announced that he was now going to take “the shackles off” racist ICE agents so they would be able to target people with impunity.

Since then, we have seen DREAMers deported — undocumented people who came to the U.S. as children and have never known another home. We have seen the U.S. deporting the gravely ill, workers, parents, elders and babies.

The federal government has now revoked women’s ability to seek asylum on the basis of domestic violence. LGBTQ people have died in ICE cells while trying to seek refuge from their home countries — where violence has been instigated by U.S. economic and imperialist policies.

The Trump regime is even beginning to normalize the denaturalization of people born outside the U.S. who have won citizenship — deporting them under the auspices of “investigating fraud.”

While private for-profit prisons are churning with thousands of incarcerated migrants forced to work for a dollar a day to pad corporate profits, thousands of children kidnapped by the federal government are crying out for their parents, while huddled under Red Cross blankets in retrofitted Walmarts or military buildings.

While the federal government is already scouting Texas for somewhere to build a tent prison to confine up to 5,000 migrant children, defense contractors are getting ready to profit off this terror, advertising jobs to build the infrastructure that will warehouse children taken from their families.

In the U.S., a secret federal police force has access to advanced database technology and seemingly unlimited jurisdiction and funding to round up millions and put them in virtual concentration camps, with no international or even community oversight.

With racist rhetoric, Trump blames capitalism’s decline on migrants. But this bigotry is not found solely in the U.S. Across Europe, far-right, racist parties are climbing to power on the backs of the world’s migrant workforce. These workers are falsely blamed for taking jobs, for violent crime, for being a so-called strain on social services and more. The racist right chooses them as easy political targets because of their immigration status, never acknowledging that they have been driven from their homelands by capitalist austerity measures and imperialist war.

Now is the time to light a fire in progressive movements, one that burns away this imperialism that migrants are running from and that openly takes on this capitalist system that, in its death throes, threatens to imprison, maim and kill many millions of the global working class.

In the U.S., Democrats and reformists wring their hands over “the immigrant crisis” and say, “Wait for the elections” — as if Obama had never deported a soul.

And now there has been such a fierce public outcry over the plight of immigrant children that even Republican lawmakers and former First Lady Laura Bush, hoping to shield their reactionary party from a total loss of credibility, have had to condemn Trump’s edicts on “family separation.”

But mere condemnation is not action. In the case of the politicians, it is an effort to deflect people from doing something about what is widely acknowledged to be a horrible assault on those already terribly oppressed and abused, as im/migrants and as workers.

Fortunately, outraged neighbors, co- workers and communities are not waiting for the politicians. The persecution of im/migrants, in the U.S. and worldwide, is spurring people into action.

For example, members of National Nurses Organizing Committee-Texas, representing 1,700 registered nurses from four El Paso hospitals, joined with other organizations on June 19 to march to the ICE Field Office in El Paso and protest the forced separation of families and detention of immigrant children.