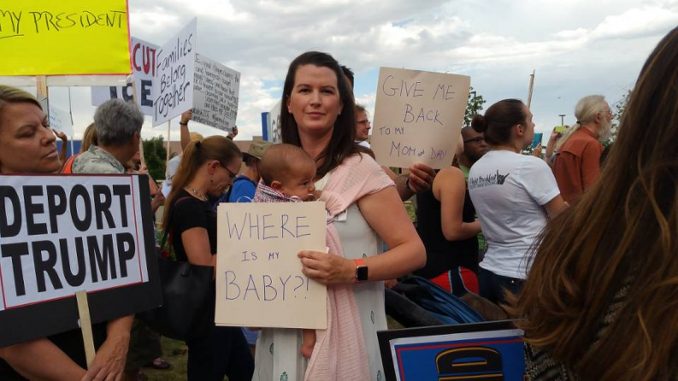 Hundreds turn out to protest ICE separating parents from children.

Aurora, Colo. — Nearly 500 people gathered in front of the GEO-ICE Detention Center here on June 14 to protest the recent U.S. policy of arresting parents who cross the U.S. border.

U.S. Immigration and Customs Enforcement takes their children away from them, often tearing them away while both parents and children scream in terror. The children, including babies and toddlers, were being placed in foster homes but, since the government declared a policy of “zero tolerance,” the number of children separated from their parents has risen into the thousands. Some have now been placed in a refurbished Walmart Supercenter in Texas, and there are even plans to send some to live in tents on military bases.

Often, the government loses track of them. When the mothers and fathers are then deported, they have no idea where their children are, nor do they have a way to reunite with them. All this has been reported in the mainstream press for weeks.

This increasing policy of “zero tolerance” for people who cross the U.S. border no longer makes an exception for those who walk up to the border and openly ask for asylum. This includes women fearing reprisal for fleeing severe domestic abuse. In all cases, the parents are arrested and their children literally torn from their arms.

Stories abound of screaming children, mothers and fathers, and of at least one father’s suicide after his children were brutally taken from him. To avoid these scenes, ICE agents lie to the parents, saying they are taking children for a shower — from which they do not return. This has spurred the protest slogans “Keep families together” and “Zero tolerance for family separation.”

The demonstration here in Aurora drew people angry over this inhumane and hateful policy, including Jews who likened it to what the Nazis had done to dehumanize and destroy families during the Holocaust.

Indivisible Colorado organized the demonstration. It is an umbrella organization of many progressive groups throughout the state. The speakers included Dreamers, the undocumented and organizers among the immigrant community.

Mother of three tells her story

Guadalupe (her last name withheld deliberately) spoke of being from a Guatemalan family but born in Mexico and then brought to the U.S. as a little child more than 20 years ago. Her mother died and she quit high school to work and raise her brothers and sisters.

Guadalupe seemed to be in her thirties, but as her eyes welled up with tears talking about her mother’s death, her face looked worn and aged.  After marrying, she had three young children. Then, her husband and she were stopped by police. They spent days in jail while the children were not notified and had no idea where their parents were. Since then, they have incurred great expense obtaining legal help, which has caused terrible hardship in addition to their living in constant fear.

Despite all this, Guadalupe had a warm smile and expressed deep love for the people who came out to support her and others like her who resist the taking of children to terrorize immigrants at the border.  She is active in two organizations that give help to the undocumented and families going through the same hardships.

Her two younger children sat lovingly looking up at their mother as she softly told her story in Spanish, a friend translating. Thankfully, they were still together. When she stepped down from the truck bed after speaking, she was surprisingly thin and barely five feet tall. She and her children ran back into the crowd.

Organizers spoke of four women in sanctuary here in Colorado who have been in contact with each other for over five months and have written a document called the People’s Resolution.  They have communicated with each other over Skype and consulted with lawyers, immigrant and faith communities. The People’s Resolution proposes direct steps that elected officials can take to create a path to status. Organizers urged the crowd to press for adoption of this plan in Colorado. (peoplesresolution.org)

They urged everyone to call elected officials, especially Republican Sen. Cory Gardner, to sign on to Sen. Dianne Feinstein’s bill to stop taking children from their parents at the U.S. border. They urged letter writing to the newspapers and doing everything to protect families from this cruel policy of being separated at the border.

The gathering ended so people could meet at Montview Presbyterian Church, where a candlelight march was to start at 6:30 p.m., and then walk to Temple Micah, a local synagogue that welcomes people of any sexual orientation. Other gatherings to protest ICE and organize to stop the U.S. government from taking immigrant children were taking place the same evening in Pueblo, Colo. An announcement asked people to protest at the home of Sen. Gardner the next day, hundreds of miles away in western Colorado.