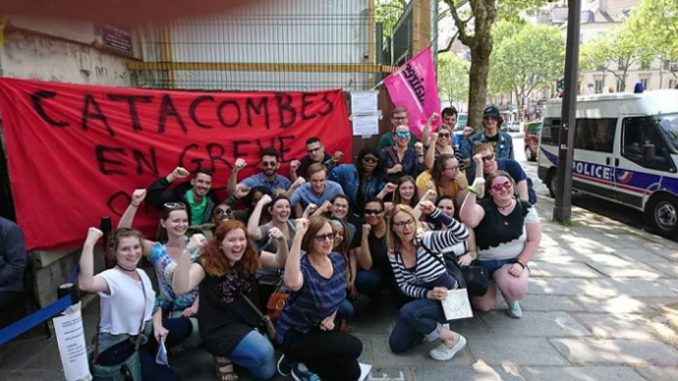 Workers in the Catacombs join the protests.

Paris, France, June 15 — In recent months, while social conflicts in France have heated up, the corporate media here have fulfilled their role to perfection. They constantly disseminate propaganda aimed at undermining the morale of struggling workers and slavishly relay the lying speeches of President Emmanuel Macron’s government. Backed by high finance, the Macron regime is hiding its intent to systematically destroy public services behind the word “reforms.”

After claiming that the numbers of strikers and demonstrators opposed to the government’s wide-ranging neoliberal measures have been diminishing, the media now declare “the imminent end of the railway workers’ strike.” In truth, the most combative unions in the railway sector (CGT, SUD …) are currently discussing the possible continuation of the struggle at the French national railway (SNCF) beyond the initially scheduled end of the strikes on June 28.

In fact, simply reading the list of all the strikes that have recently taken place or continue to take place in France would exhaust the airtime of the television news! Commentators who are subservient to the ruling class talk about these conflicts as a “French illness” that should be eradicated. One deputy from the presidential majority has even called this a “strike culture.”

We must see this proliferation of social struggles as a reason for optimism. It is in these movements that workers, especially the youngest, are trained. They are relearning how to build indispensable bonds of solidarity and local forms of organization while developing future leaders.

Despite the many difficulties encountered, these struggles will gradually increase and bear fruit. Patience is required. Class consciousness is growing, and with it the courage of more and more workers who are leaving behind inertia and resignation.

This is especially so since some of these social movements are unusual, even historic. A few examples:

The number of unionized fast food employees is increasing sharply. At McDonalds, strikers — some of whom fought for more than six months — demanded better working conditions and wages but also denounced the company owners’ tax evasion and failure to share profits.

Workers in other companies no longer hesitate to expose cases of workplace exploitation and abuse. In the wake of the employee mobilization at the Carrefour “big-box” retail stores in France, the movement spread to Belgium, where a hundred Lidl stores had to close during a spontaneous strike.

For several months, employees in elder care institutions have been demonstrating to denounce paltry salaries and decry speedups and understaffing. They also denounce poor living conditions for the residents and the exorbitant fees charged.

In May, tourists could observe that Paris sanitation and sewer workers were mobilized. These workers sought recognition of the “hardship” of their professions and demanded the right to early retirement.

In mid-June farmers blocked 14 oil refineries throughout the country to protest the government’s decision to allow palm oil imports (notably from Indonesia). This oil is intended to feed biofuel production but also threatens the French rapeseed industry.

Goaded by the latest capitalist drive for privatization, outsourcing and downsizing of the work staff, social unrest is so deep that it even affects professions that never in living memory have been seen to demonstrate.

In May, a thousand auditors took to the streets against a bill that would cancel the requirement that small and medium-sized businesses have their accounts certified by accounting firms (which would cause a loss of auditor income).

A month earlier, magistrates and lawyers were on strike to protest the Ministry of Justice’s decision to “merge” (in reality, to close) the small-claims courts, which hear claims that do not exceed 5,000 euros ($5,800), and have these claims heard in higher courts. In addition to cuts in budgets and jobs, this move would lead to dehumanized and privatized justice and deter the poorest from initiating legal proceedings to defend their rights.

In May, it was the turn of workers at the Catacombs (an underground cemetery where many thousands of skeletons are stored beneath Denfert-Rochereau Square) and the Archaeological Crypt to engage in the longest strike ever held at Paris museums. The employees are demanding “dignified and fair” working conditions, safety for the agents and security at these tourist sites, and a bonus for working underground in difficult conditions.

Thus, the strike wave of the spring of 2018 has already drawn new sectors of the working class into struggle and trained rank-and-file leaders of tomorrow.

Herrera is a Marxist economist, a researcher at the Centre National Recherche Scientifique, who works at the Centre d’Économie de la Sorbonne, Paris. WW staff translated this article.