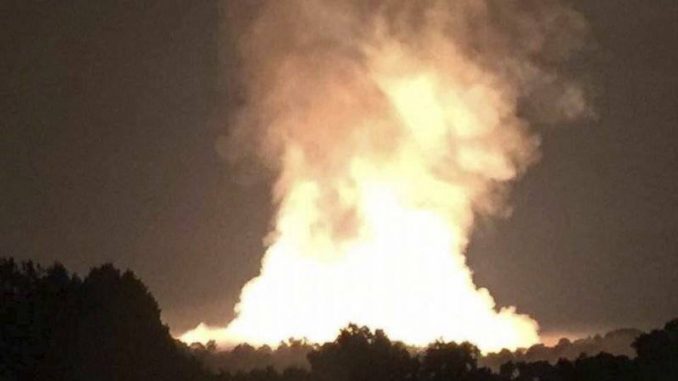 Explosion on the Transcanada Pipeline at Nixon Ridge in West Virginia, June 7.

A fireball shooting up from an exploding natural gas pipeline in Moundsville, West Virginia, on June 7 was seen as far away as western Pennsylvania. (Pennsylvania Real-Time News)

TransCanada is infamous for many similar blowouts on its TransCanada pipeline in western Canada. The corporation is the fossil fuel giant pushing to build the Keystone XL and Potomac pipelines against widespread opposition.

Keystone XL is planned to carry tar sands oil from Alberta, Canada, across the Plains to the Gulf for export.

Its route would run through the precious Sandhills habitat, across many Indigenous sacred and burial sites, and through prime farmland—all of which would be threatened with destruction.

Indigenous communities joined by white farmers and ranchers in the Cowboy-Indian Alliance protested against the KXL pipeline from Lincoln, Neb., to Washington, D.C. This struggle stopped KXL in 2015, but it has been restarted by a 2017 permit greenlight from the Trump administration.

“The fight to kill the Keystone XL pipeline begins anew — and Donald Trump should expect far greater resistance than ever before,” said Dallas Goldtooth for the Indigenous Environmental Network. “We’ve stopped the toxic Keystone XL Pipeline once and we will do it again.” (www.cbc.ca)

Goldtooth continued: “We hope that everyone around the world who stood with Standing Rock [on the Dakota Access Pipeline] will continue to stand with us and all the tribes as we continue to fight these dangerous and short-sighted infrastructure projects that serve only the interests of billionaires.”

TransCanada plans for the Potomac pipeline to run under the Potomac River and the Chesapeake and Ohio Canal and carry natural gas from Pennsylvania to West Virginia. A leak on the Potomac pipeline would foul the drinking water not just of residents of the District of Columbia, but also of the millions who live in the potentially affected area.

The Indigenous women leaders of the KXL water protectors inspired youth from Standing Rock. The youth returned home to kick off the powerful struggle against the Dakota Access Pipeline (DAPL) at Standing Rock reservation. These included the youth making long distance runs to broadcast the threat of DAPL to the drinking water of the Missouri and Mississippi rivers.

Indigenous women built the struggle of the Lakota/Dakota/Nakota Nation against DAPL. The struggle was joined by thousands of Indigenous people and supporters from all over Great Turtle Island and beyond. The water protectors faced brutal repression by county and state cops from many states, the National Guard and illegal mercenary thugs.

This was a fight to protect Standing Rock’s “Winters Rights” — guaranteed by the 1908 Supreme Court case Winters v. United States — to, and to protection of, clean water needed by the reservation. Many of those arrested during the assault by the state and corporate thugs are still facing trial dates and further repression.

After Trump’s inauguration, Energy Transfer Partners got final approval to finish DAPL. Now millions of gallons of crude oil from western North Dakota are flowing under the Missouri to a pipeline in Illinois to refineries in the Gulf of Mexico for export. A Missouri spill would destroy clean water for Standing Rock and 18,000,000 people downstream.

The U.S. is densely crisscrossed with fossil fuel pipelines, and pipelines corrode and rupture. There are about two pipeline incidents a day in the U.S. (tinyurl.com/y9bml2zw) And Big Oil never totally cleans up spills — from Deepwater Horizon in the Gulf of Mexico to Exxon Valdez in Alaska.

Spills, leaks and petrochemical explosions damage the environment — the waters, the air, the land — as well as habitats, wildlife, and people’s health. All humanity and all species are threatened by global warming, which is a result of the use of fossil fuels. More pipelines are not needed. Stopping global warming will require transition out of the fossil-fuel economy.

Clean water is a human right. Water is Life!