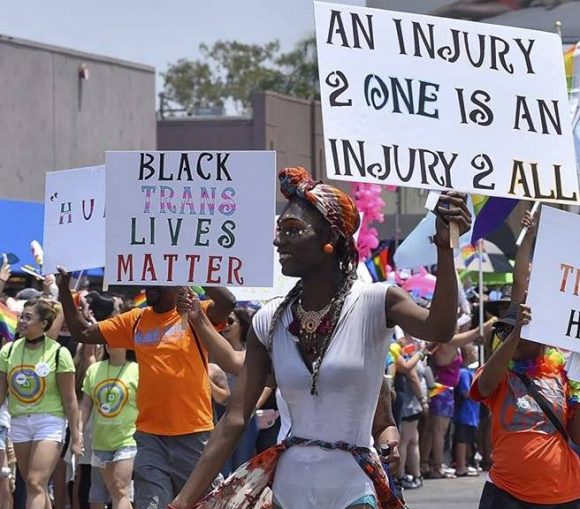 San Diego, Calif. — Workers World Party comrade Rahui Suré Saldivar-Soto organized a public workshop here on the transgender struggle and origins of Pride on June 6. Transgender people and butch lesbians, especially working-class Black and Brown transgender people, have always been at the forefront of the struggles for queer liberation. Special attention was given to the stories of Sylvia Rivera, Marsha P. Johnson and the late Comrade Leslie Feinberg of Workers World Party.

With a radical intersectional analysis, Saldivar-Soto showed how transgender people, especially transgender women, have faced alienation, violence and ostracization from society and even mainstream sectors of the queer community. As discussed in the workshop, there is practically no issue facing working-class people of color that is not magnified for transgender people. Transgender youth experience the highest percentage of unemployment, homelessness, mass incarceration, addiction and multiple health issues caused and exacerbated by the racist, transphobic health care system that has historically misdiagnosed and ignored trans people.

The state system of policing and mass incarceration has historically overlooked violence against working-class transwomen as well. As Saldivar-Soto pointed out, the average life expectancy for trans people is 35 years, but for trans people of color that number is as low as 30 years. Saldivar-Soto recalled personal narratives of people as young as 14 who have died in San Diego.

Despite the acute struggles of ­transgender people and the centrality of trans leadership in queer liberation struggles — transgender people were at the forefront of the uprisings at both the Compton Cafe­teria in San Francisco in August 1966 and the Stonewall Inn in New York City in 1969 — neoliberalization of the mainstream LGBTQ movement has erased the contributions of the most vulnerable of the community.

Comrade Bob McCubbin noted the way that the mainstream push for integration separated the movement throughout its long history. He pointed out the split between the Gay Liberation Front and the Gay Activists Alliance in New York City in the 1970s, with the former committing itself to radical and internationalist work.

That this contradiction is especially sharp in San Diego came out during the workshop. The political economy of San Diego, which is based on real estate speculation, the military-industrial complex, private investment capital and tourism, is much different from that in other West Coast cities. With very little history of industrial labor outside of military contract work, working-class San Diegans have long experienced drastically uneven economic conditions. It is within this history that the issues of transgender people have been disregarded or tokenized.

The outcome of this workshop was a commitment toward action and future workshops. Saldivar-Soto noted that transgender and queer youth represent 40 percent of homeless youth. Even in spaces trans youth consider the safest for them, sexual exploitation and other forms of violence prevail.

Future workshops have been planned. Workers World Party is organizing a public forum on LGBTQ issues in July and specific programming on trans issues has been outlined.