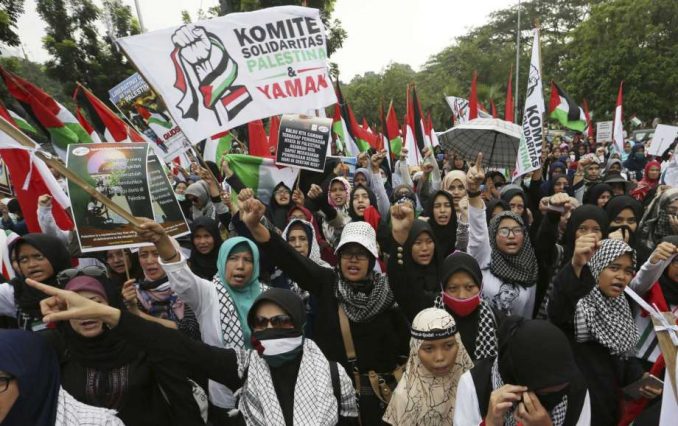 Since 1979, hundreds of thousands of people in the Middle East have protested Israel’s occupation of Jerusalem on al-Quds day, the last Friday of the Muslim holiday of Ramadan, to show wholehearted solidarity with the Palestinian people.

The February decision by White House resident Donald Trump to recognize Jerusalem as Israel’s capital and move the U.S. Embassy there triggered mass protests in Palestine, elsewhere in the Middle East, and in cities around the world, including in the U.S.

Since March 30, Palestinians have participated in the Great March of Return to the border fence separating Gaza and Israel, insisting on their right to return to their homeland of Palestine, now Israel. Gaza’s population comprises Palestinians violently forced from their houses, farms and villages during Israel’s founding in 1948 and their descendants.  They object to the theft of their land, Israel’s inhumane blockade of Gaza and the U.S. Embassy’s relocation to Jerusalem.

The Israeli Defense Forces have responded with brute force, killing at least 129 Gazans and wounding another 13,300. (TeleSUR, June 9)  World outrage has soared at Israel’s murderous war on the Palestinian people, held in Gaza’s “open-air prison.” Global demonstrations have shown concrete solidarity with this besieged, but resolute people, including on al-Quds Day.

Syrians and Palestinians marched together in Damascus, in the old city to the Umayyad Mosque.  A Palestinian in Syria, Hamid Hassan, said that Al-Quds Day “means a lot for us. Jerusalem is an Arab land.”  (The Daily Star, June 9) Israel annexed East Jerusalem in 1967.

Tens of thousands marched in Tehran and 900 other Iranian cities and towns to condemn Israel’s occupation and murderous violence. Thousands marched in Baghdad, Iraq.  In Islamabad, Pakistan, protesters burned Israeli and U.S. flags, as well as an effigy of Trump.

Chants of “Freiheit fur Palastina” (Freedom for Palestine!) resonated in Berlin and Vienna.  Some 2,500 people, a larger-than-usual crowd, marched in the German city, calling for a boycott of apartheid Israel.  Hundreds of medical workers carried photos of 21-year-old Palestinian medic Razan al-Najjar slain by an Israeli sniper on June 1.

Hundreds of demonstrators were on the streets in Vienna; many carried a replica of the apartheid wall on Gaza’s border.  They called for global solidarity for Palestinians fighting the occupation and oppression and for worldwide action against Israel’s atrocities.

In Canada, thousands, including medical workers, marched in Toronto to the U.S. Consulate General’s office. They called out,  “Gaza, Gaza, Don’t you cry! We won’t let you die!” “Viva, Viva Palestine!” and “Justice for Palestine!” Some signs read, “Zionism is racism!”  A Walk for Palestine Liberation and Gaza Freedom took place in Ottawa to the Israeli Embassy.

Hundreds of people took part in two demonstrations in Haifa, Israel, on June 1, against Israeli attacks on Gaza.  Early in the day, 300 people rallied, including Arab legislators and activist Jafar Farah, who said a police officer shattered his knee in detention after a demonstration protesting Israel’s violence in mid-May. That night, hundreds of youth and others protested IDF assaults on Gazans.

In Nabi Saleh on the Occupied West Bank, Israeli soldiers fatally shot 21-year-old Izzedine Tamimi, cousin of 17-year-old Ahed Tamimi, Israeli political prisoner, after removing him from his house, on June 6. He was the third member of the Tamimi family executed this year by the IDF. Eyewitnesses say military forces prevented paramedics from treating him. Subsequently, soldiers attacked angry village residents.

Then, on June 10, in central Ramallah in the Occupied West Bank, 1,500 people demanded that the Palestinian Authority lift its sanctions on Gaza. “It is the biggest popular show of solidarity toward Gaza in the West Bank since the beginning of the Great March of Return in Gaza,” reported Israeli newspaper Haaretz on June 11. Several Palestinian residents of Jerusalem participated, while the demonstration size kept increasing.

Palestinian political leaders walked alongside university students. The crowd chanted pro-Gaza slogans and held photos of martyr Razan al-Najjar. Other slogans were “Shame on you, you sold Gaza in dollars” and “With soul and blood, we will save you, Gaza.”

Hundreds of LGBTQ activists blocked the LGBTQ Pride march in Tel Aviv on June 8, saying, “There is no pride in occupation.” A video posted at NYC Solidarity with Palestine on Facebook shows a self-identified queer activist asserting that Israel uses “pinkwashing” to “distort horrible atrocities in the West Bank, Gaza and across Palestine.”

Organizer Tamar Ben Davi explained, “We came here to protest the cynical exploitation of the LGBTQ struggle for the good of the Israeli government’s crimes, which is why we came with a fence.”  Nearby Israeli soldiers “are shooting people exercising the right to protest.” Yuli Novak said the LGBT community’s challenges “are not disconnected from the struggle for the rights of others. In every struggle that celebrates freedom and liberation, we will be here to protest against the crimes committed in our names.” (TeleSUR, June 9)

A flier distributed in Tel Aviv read: “The Israeli Government markets Tel Aviv as a city of freedom, and yet 70 kilometers away from here there are two million Palestinians jailed in Gaza. … As members of a community that is still fighting for full rights and equality, we will not be silent in the face of human rights violations and repression of the freedom to protest. We will stand in solidarity with Palestinians living under occupation and under siege.”

Israeli Jewish activists, self-named “RETURN,” hung photos of martyrs of the Great Return March on Gaza’s “Apartheid Fence” on June 7, in response to the call for international solidarity.  They called for worldwide sanctions on Israeli industries.

A participant said: “The Palestinians besieged in Gaza are marching home, back to the villages and cities from which they were expelled. They are marching out of the desert that Israel has transformed Gaza into, and because of this, the Israeli occupying army is murdering them in cold blood. The courage and sacrifice of these people demand all of us to stand up and ensure an end to Israeli impunity. Apartheid must end, and we are the ones who must end it.” (Mondoweiss, June 7)

Bill Dores contributed to this article.