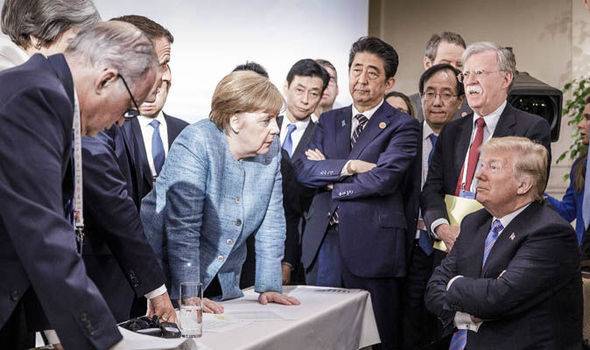 Donald Trump at the G7.

The response to President Donald Trump’s arrogant withdrawal from the Iran nuclear deal and wild threats of tariffs on U.S. allies has exposed declining U.S. influence on a global scale.

This became all too obvious at the gathering in Quebec, Canada, of the G7 summit of the seven major imperialist powers — United States, Canada, Britain, France, Germany, Italy and Japan. With the exception of Japan, the other six countries are also leading members of the U.S.-commanded NATO military alliance.

Trump’s insults and contradictory statements before and after the G7 meeting, and his threats of new tariffs unleashing an unpredictable trade war, reinforced the disarray in the global capitalist order that U.S. imperialism has commanded for 70 years.

Washington is increasingly unable to control the global agenda. U.S. corporate power finds it can no longer order the nations of the world to isolate the People’s Democratic Republic of Korea or Iran.

The U.S. has less to offer except threats of military destruction, unpayable debt and broken agreements. This untenable situation is the cause of Trump’s rants, tweets and temper tantrums.

The June 12 meeting in Singapore of President Kim Jong Un and Trump, and the joint communiqué signed afterwards, was met with great enthusiasm in North and South Korea — and worldwide. But this is hardly based on Trump’s skill as a negotiator. Events in Asia are moving far beyond U.S. control.

The images of the two warm meetings of President Moon Jae-in of South Korea and President Kim of the DPRK; President Kim’s two meetings with President Xi of China; and the Shanghai Cooperation Organization Summit, which opposed all sanctions, ending the day before Trump arrived in Asia; confirmed that decades of U.S. efforts to isolate DPRK had failed.

In past years G7 summits were usually weekend photo ops, with a vague unity statement to paper over deep economic rivalries behind the scenes.

The only agreement among these top officials, who represent the largest bankers and corporations, is about imperialist wars. They agree on the NATO bombing of Libya, the concerted regime change effort in Syria, the expansion of NATO to the borders of Russia, and the effort to pull Ukraine into the NATO military alliance. They agreed to impose harsh sanctions on Russia and expel Russia from what was then the G8 when Russia moved in 2014 to save its only naval port in Crimea from being captured by NATO.

In past decades, the U.S. had great influence in establishing, and steering for its benefit, this gathering of the world’s largest imperialist powers. In essence it is a gathering of thieves and robbers in an alliance to loot the developing world through international banking agreements, utilizing the International Monetary Fund and World Bank, and imposing starvation sanctions on countries that have stepped out of line. But at the same time, these pirates are also ruthlessly competing with each other.

As one meeting of world leaders of the major imperialist countries ended in Canada, another very different meeting was opening in China.

More than 2,500 domestic and foreign reporters and 2,000 guests came to Qingdao, a coastal city in Shandong province, to attend the Shanghai Cooperation Organization summit on June 9 and 10. A dozen agreements on economic cooperation and security were signed.

The SCO summit involves eight Asian countries in the developing world. Four of them — China, Russia, India and Pakistan — are large countries. The Central Asian countries Kazakhstan, Kyrgyzstan, Tajikistan and Uzbekistan are also members. Several other Asian countries have observer and dialogue partner status. The member countries account for 3 billion people, almost half the world’s population.

SCO’s newest member, as of this summit, is Iran.

This meeting of global significance has received scant attention in the U.S. media. One headline of CNNMoney, however, summarized the new reality: “Forget the G7. A summit happening in China is what really matters.” (June 8)

The SCO is not a revolutionary alliance. Nor is it an international coalition that challenges capitalist property relations or the global order in any fundamental way.

It is an international gathering outside of all imperialist-dominated forums. Many of the member countries are targeted by imperialism and seek mutual assistance and cooperation in order to develop.

Initially established as a regional security grouping, the SCO nations have increasingly focused on expanding trade and strengthening wider cooperation among developing countries.

Plans already underway for vast modernization, the introduction of new industries and advanced communication will lead to a large expansion of the working class throughout the entire region.

China’s agenda in hosting the SCO summit is to expand its regional influence and bypass U.S. military encirclement through numerous trade and infrastructure agreements. It now has the nationalized resources and the expertise to help fund large-scale development projects and to upgrade the infrastructure of major roads, railways, ports, pipelines and telecommunications to meet the needs of neighboring countries.

Trump’s May 8 announcement on Iran unraveled an international agreement, the Joint Comprehensive Plan of Action, signed by seven countries — U.S., Britain, France, Germany, Russia, China, Iran and the European Union — after years of dire U.S. threats. Although Iran had met every provision of the restrictive treaty, stringent sanctions and harsh new penalties to any country doing business with Iran will be imposed.

France, Germany and Britain, along with the EU, denounced the unilateral action because it blocked their unfolding business deals. In a joint statement, they officially reminded Trump that a U.N. Security Council endorsement had made this a binding international agreement. Despite their opposition to Washington’s decision, they began closing down their projects in Iran.

Trump’s withdrawal from the Iran agreement is hardly a surprise. From the hundreds of treaties made with Indigenous nations to the Vietnam Peace Treaty, agreements with the Democratic People’s Republic of Korea, the Anti-Ballistic Missile Treaty with Russia, Washington has never respected or abided by any pact made with oppressed, developing or targeted nations.

But Washington’s decision to withdraw from the signed agreement, reimpose sanctions and demand every other country follow suit or face penalties no longer has the impact it did even five years ago.

Iran is a key transport hub between Asia and Europe and provides maritime access to landlocked countries. China’s proposal for a high-speed railway across Central Asia is advantageous to Iran and to the development of the whole region.

Russia, Iran and China can trade in the Chinese yuan, now an international currency. This means they can avoid U.S. sanctions on both Iran and Russia, which complicate all U.S. dollar transactions.

Attendance at the SCO

It is significant that both Prime Minister Narendra Modi of India and President Mamnoon Hussain of Pakistan attended the SCO summit and shook hands. These two nuclear states have fought three wars against each other. British and U.S. policy for decades was to do everything possible to keep India and Pakistan in hostile contention.

Russian President Vladimir Putin attended the summit. Russia’s economy is much smaller than China’s and is growing slowly. But Russia is one of the world’s biggest energy producers. It also faces U.S. and EU sanctions.

Qingdao was a symbolic choice to host the SCO summit. It is at the eastern end of a vast railway network across Eurasia and a logistical center linking the Silk Road Economic Belt with the 21st Century Maritime Silk Road.

According to Chinese news reports, this 18th summit is expected to “ratify a five-year outline for the implementation of the Treaty on Long-term Good Neighborliness, Friendship and Cooperation,” as well as “approve more than 10 cooperation deals covering areas including security, economy, and people-to-people exchanges.”

U.S. imperialism’s economic domination has declined dramatically. So has the economic weight of the EU countries.

In contrast, the Asia Pacific region’s share of the global economy is expected to rise to 39 percent by 2023, while that of North America is estimated to fall to 25 percent, according to the IMF.

French President Emmanuel Macron tweeted that the other G7 members wouldn’t “mind signing a six-country agreement if need be.” The six other G7 countries now form a larger market than the U.S. market.

But, as Putin pointed out, the combined purchasing power of the SCO now outstrips that of the G7.

News reports and commentaries at the SCO focused on this new alliance challenging the existing world order led by the U.S.

All of this will have an impact on Trump’s talks with the DPRK. Trump faces a common determination to not allow U.S. threats or sanctions to isolate any country or destabilize whole regions.

The Pentagon’s response to the historic SCO gathering was to send U.S. B-52 bombers on maneuvers in the South China Sea on June 5. Earlier, on May 27, two warships sailed near the South China Sea islands claimed by China. China denounced U.S. militarization of the region and its willful trespassing as highly provocative.

While fighting among themselves at the G7 meeting, both Britain and France agreed to have their warships join the aggressive U.S. naval operation, labeled the “Freedom of Navigation Flotilla,” in the world’s most important shipping corridor.

It is hardly a coincidence that the announcement among these imperialist pirates was made in Singapore days ahead of Trump’s meeting with President Kim Jong un of the DPRK.

This old-fashioned gunboat diplomacy can’t stop the people of the world from pursuing development and communication.

Flounders is co-coordinator of the International Action Center.