Iowa City, Iowa, June 3 — Some 210 members of Faculty Forward Iowa are fighting for better working conditions for nontenure track faculty and graduate student workers at the University of Iowa.

Faculty Forward is a campaign by the Service Employees Union, a national effort to ensure “everyone has access to education and that all educators receive fair pay and stable work.” Over 54,000 faculty and graduate students on 60 campuses have joined this campaign to organize unions. This is an important struggle considering the sad state of affairs in higher education. (seiufacultyforward.org)

As noted by Faculty Forward: “Desperate to keep the doors open, universities hired high-priced executive administrators who turned college into big business. They hiked tuition, cut tenure track positions and decreased faculty pay, all while pocketing handsome paychecks. The result is a rigged system where only a select few get access to a quality education and too many educators live in poverty.” 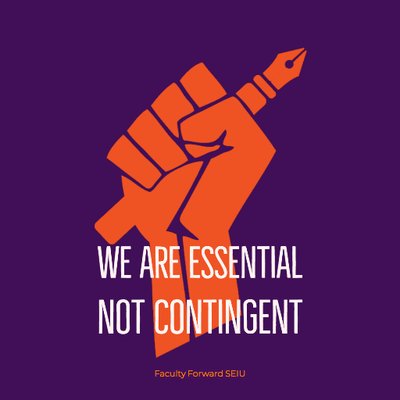 The Faculty Forward campaign started organizing UI employees last fall and publicly announced the Faculty Forward Iowa campaign earlier this year. FFI members rallied Feb. 26 at the Pentacrest (the Old Capitol and surrounding buildings) as part of a national day of action coinciding with the Supreme Court hearing on the Janus v. American Federation of State, County and Municipal Employees, Council 31 case. The “We Rise Rally for Workers’ Rights” gave a platform to FFI which expressed its solidarity with other workers.

Despite the image of academic workers promoted by the corporate media, many professors and graduate students are not “overpaid” with “cushy jobs.” Many are struggling to get by. The grueling workload, hectic scheduling and other burdensome conditions are not compensated with pay and benefits comparable to those granted to tenured professors and administrators.

UI Visiting Professor of Linguistics Brooke Larson joined the FFI campaign during the early stage of the organizing effort. Larson earned her Ph.D. at the University of Maryland in 2013 and has taught at other colleges. Larson told Workers World how she and many of her colleagues are being “worked to the bone without job security.”

“I have taught five courses in a single semester,” Larson said, which is “shocking compared to other schools.”

UI Associate Professor of Rhetoric Megan Knight, an FFI member, told The Daily Iowan, “I’m involved because I’ve worked for Iowa for 20 years, I’ve been in the Rhetoric Department since 1998, but my salary has remained flat since then.” (Feb. 27)

Between 50 and 60 FFI members and supporters gathered at the Pentacrest again on April 18. The gathering then marched to the office of UI President Bruce Harreld to deliver a petition with close to 200 signatures and a letter listing their demands.

The letter stated, “By joining together, across the University of Iowa, we can win a voice on our campus, and advocate for better working conditions that in turn will improve our students’ learning conditions.”

A dozen FFI members staged a sit-in outside Harreld’s office at 10 a.m. on May 9. They were told he was “too busy” to meet with them. At 6 p.m., Harreld’s senior advisors Peter Matthes and Laura McLeran finally met with FFI members. “Matthes and McLeran agreed in writing to schedule a meeting between representatives of Faculty Forward Iowa and university officials who can address the group’s demands.” (littlevillagemag.com, May 8)

FFI representatives met with Harreld and six other administrators on May 16 to “discuss the concrete steps we’re demanding they take to improve our working lives,” according to an FFI public statement on Facebook.

The UI administration altered the terms of the meeting by limiting FFI to no more than nine faculty members at the meeting. As noted by FFI, “The exclusion of faculty members from the negotiating process runs counter to the core values of our movement, but ultimately we agreed not to pass up this hard-won chance to press for concrete improvements.”

Larson said FFI members will be meeting with Harreld and other administrators in the coming weeks. “We’re trying to get the voice of all our members heard behind these closed-door meetings.”

This series of meetings will determine if UI will accept FFI demands, or if this fight for justice will continue.