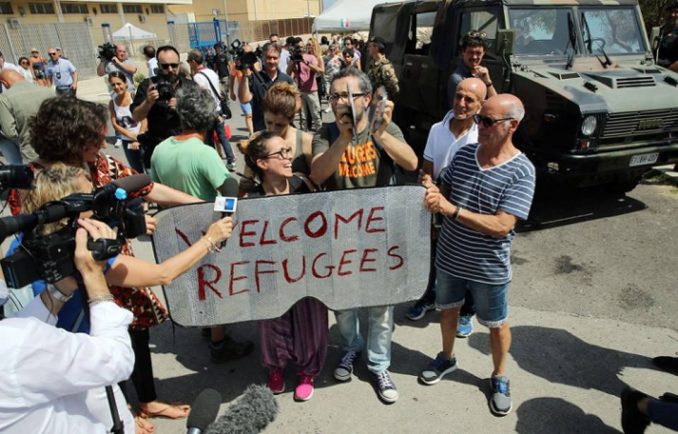 After nearly three months of political maneuvering, two political parties in Italy formed a government on June 1. Both the League and the Five Star Movement (M5S) oppose the eurozone, which they call a tool for sucking out Italy’s wealth to increase German prosperity. The two parties formed an alliance that decries so-called “illegal” immigration and virulently opposes the establishment parties, especially the Democratic Party, which had controlled the government.

The ultraright, racist League started out its existence as the Northern League, agitating for the independence of northern Italy, Italy’s most prosperous and developed region. Its propaganda scorned southern Italians. Party leaders changed its name to the League when they decided to drop separatist goals in order to compete for office across all of Italy.

Matteo Salvini, the League’s leader, focused his party’s campaign on hostility to “illegal” migration, pushing for the immediate expulsion of some 700,000 refugees in Italy. Salvini, who will remain the party’s leader, is currently minister of the interior and one of two vice premiers in the government.

Luigi Di Maio is the political leader of the Five Star Movement, which proclaims it is “neither left nor right” and is generally called “populist.” The M5S’s main base of support is in southern Italy, which is relatively less developed. In some areas there, unemployment is as high as 50 percent. Di Maio’s main campaign plank called for major income tax cuts for workers, with corresponding tax hikes for the wealthy, along with a guaranteed monthly income of $912 for the unemployed.

Italy is facing major financial difficulties. The ratio of its public debt to its gross domestic product is 130 percent, and it owes about $2.77 trillion to bondholders. (nationaldebtclocks.org, June 4)

Salvini’s anti-immigrant rhetoric has been contested. When he made a campaign-style tour on June 3 of southern Sici­lian ports, all of which have seen large landings of refugees from Libya, left-wing and other opponents protested his presence.

Some residents of Sicily denounced him during his stop in Pozzallo, where many ships carrying migrants rescued from the Mediterranean Sea dock and many refugees begin the asylum-seeking process. Demonstrators held a banner reading, “Refugees welcome!” and shouted, “Salvini! Go home!” and “Salvini! Shame on you!” (Associated Press, June 3)

On the same day that Salvini traveled to Sicily, 50 migrants died in the Mediterranean Sea off the Tunisian coast. The next day, the government of Tunisia criticized Salvini’s crass attacks on migrants from their country.