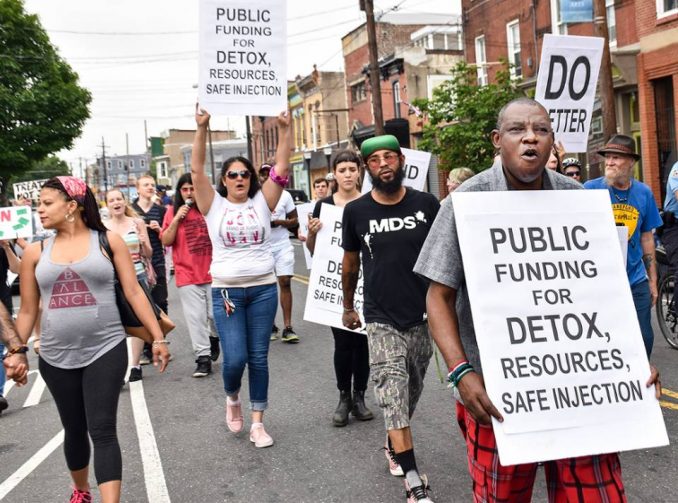 The city of Philadelphia acted on its threat to evict the Kensington Avenue and Tulip Street tent cities, as Workers World newspaper reported on May 24. (tinyurl.com/y6ug447w) However, this removal didn’t occur without a fight. For the first time, encampment residents fought back against the anti-poor, pro-gentrification program.

On the night of May 29, former and current members of the camp told their stories of addiction, recovery and being rebuffed by the city’s Crisis Response Centers after seeking help. Dozens of supporters came forward to provide food, water and care packages to the city’s most marginalized people.

The next day, dozens more residents publicly made demands on the city for respect when people reach out for help and transparency from Community Behavioral Health, Pennsylvania’s behavioral health managed care provider. They called for more access to methadone and buprenorphine programs and for additional treatment beds and better shelters. Workers World Party-Philadelphia was at the scene and stood alongside those struggling against this oppressive, anti-poor system.

Vanessa Baker, organizer of the protest, promised encampment residents that the protesters wouldn’t leave them. This remained true: On May 30, they returned to march down the streets, making their demands and anger known to the city’s gentrifiers, whose arrival prompted the evictions.

WWP-Philadelphia will stay true to Baker’s promise and pledge to support the rights of former encampment members to adequate treatment, health care and housing, and of current residents at the remaining homeless camps in the city.