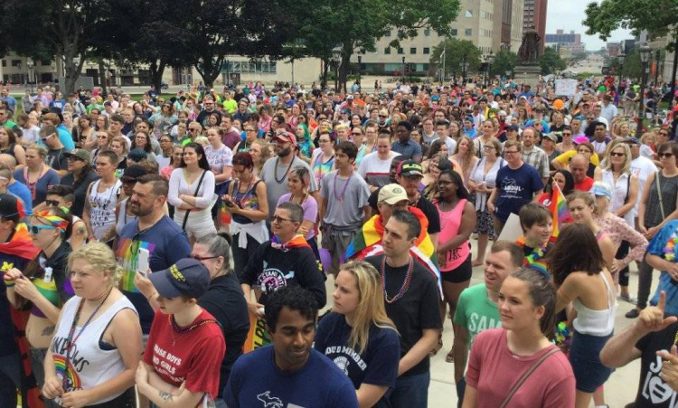 As of May 21, in time for a Pride Month celebration, the Elliott-Larsen Civil Rights Act protects LGBTQ people in Michigan from discrimination in employment, housing, education, public services and public accommodation. The Michigan Civil Rights Commission (MCRC) voted 5-1, with one abstention, to reinterpret the act to treat discrimination based on sexual orientation or gender identification as a form of sex discrimination.

Michigan is the first state in the country to reinterpret longstanding legislation to the benefit of LGBTQ communities, following similar action at the federal level under the Obama administration. The Elliott-Larsen Act was originally passed in Michigan in 1976.

Only 18 states have the words “sexual orientation” written into their civil rights laws, and not all of those have “gender identity” and “gender expression.” Legislative efforts to add those categories to Elliott-Larsen have been voted down. The movement to have LGBTQ-specific language added legislatively is ongoing.

That means the recent reinterpretation by the commission is a huge victory for those who previously could legally be fired, evicted and otherwise subjected to the indignity of discrimination because of sexual orientation or gender identification.

Civil rights groups launched the Michigan campaign for legal protection in 2017. The commission heard from dozens who testified at public hearings about their experiences with discrimination and read hundreds of pages of public comment. In September, after Attorney General Bill Schuette weighed in against the LGBTQ community with his Tea Party politics, the commission voted not to adopt any changes. However, after the community came back with legal arguments from 30 different legal scholars and experts, the commission reversed its position and extended the protections.

The one commissioner who voted in favor of the status quo, Ira Combs, was appointed by Gov. Rick Snyder in February over the objections of LGBTQ organizations. Combs is a right-winger who has campaigned against local human rights ordinances that protect LGBTQ people.

Attorney General Schuette is claiming that only the state Legislature can make changes to the law and is vowing to overturn this recent victory. The MCRC has countered that legislators can only pass laws; it’s up to the agencies that enforce them to interpret them.

For the time being, after decades of struggle, the movement against patriarchal oppression under capitalism can claim a win.