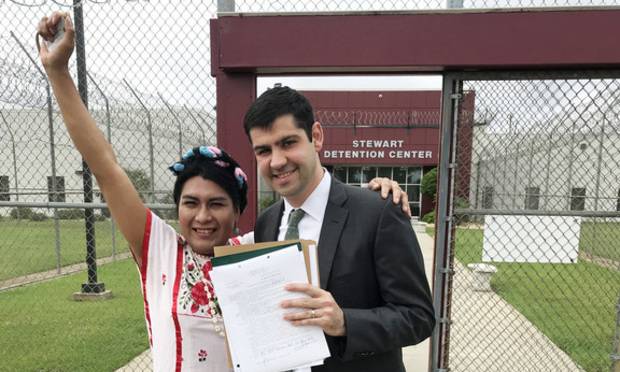 Estrella Sánchez, left, with her lawyer.

Estrella Sánchez, a Mexican transgender woman, emerged on May 22 from immigration court in the Stewart Detention Center in Lumpkin, Ga., with her asylum papers in one hand and her other hand raised in a fist.

Despite a long, hard-fought battle that took 6 years, multiple denials of her asylum petition, months in detention, physical attacks and psychological trauma, Sánchez had prevailed.

The details of her story are brutally painful to recount, but not so unusual for those fleeing violence in their home countries, whether from anti-LGBTQ violence, drug cartels or political repression.

In her asylum petition, Sánchez recounted years of sexual abuse and rape while growing up in Mexico, beginning when she was 8 years old. Family members, as well as local authorities, directed their anti-trans animus at her, leaving her isolated and fearful. At 19, she fled for her life and crossed into the U.S. Promised work as a caregiver, she was instead held against her will in a Texas brothel for almost a year before making her escape.

When she was picked up by police for driving without a license, she was sent to the Stewart Detention Center to await deportation. Stewart is an all-male facility, and Estrella Sánchez was subjected to harsh treatment and abuse by other detainees and guards. The for-profit facility responded by putting her in solitary confinement. When she was finally released from prison to await a hearing, she was ordered shackled with an ankle monitoring device.

The immigration judge who heard her case was Dan Trimble, one of the most intransigent members on the U.S. Immigration Court. From 2012 to 2017, he denied asylum to immigrants in 95.8 percent of his cases, according to Transactional Records Clearinghouse.

On three separate occasions, he denied Estrella Sánchez’s petition, rejecting her claims of abuse because of being transgender. The Department of Homeland Security, which also opposed her appeal, claimed that the social situation in Mexico had improved, and her life would no longer be in danger if she returned.

When Sánchez was first scheduled to be deported back to Mexico, she finally found legal assistance, first, with Immigrant Equality and then, with pro bono lawyers from the Kilpatrick law firm in Atlanta.

While all the legal work was being done, Sánchez became politically active in Atlanta and beyond. She is a constant presence at demonstrations and rallies for immigrant rights and against mass incarceration and deportation. Always wearing her traditional clothing, she has spoken at numerous conferences nationally and supported trans organizations. She was named a marshall for Atlanta’s 2017 Pride Parade, and there is a large, beautiful mural of her in the immigrant community along Buford Highway.

In April, the Board of Immigration Appeals overturned Trimble’s third denial of Estrella Sánchez’s petition, finding no evidence that conditions in Mexico had improved so much that she would not suffer persecution as a transgender woman.  It instructed Trimble to grant her asylum.

Sánchez can now apply for a green card and, after five years, will be eligible to apply for citizenship.

Sánchez plans to continue her advocacy for transgender immigrants, a mission she has carried out for the last six years with the threat of deportation always on her mind. Relieved of that burden, Estrella Sánchez is now considering becoming an immigration lawyer.