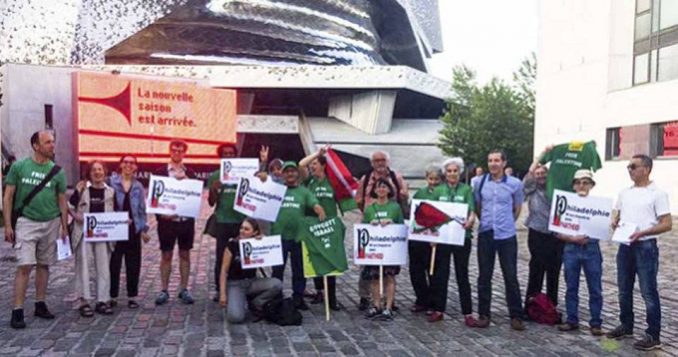 Philadelphia — Palestine solidarity activists have held weekly demonstrations since April 6 outside the Kimmel Center for the Performing Arts here. They called on the Philadelphia Orchestra to cancel its planned visit to Israel. Despite clear and growing opposition, including from orchestra patrons, the group departed on May 21 for Europe, telling the Philadelphia Inquirer that it was “resolute” in its decision to go forward with the visit to Israel.

Yet, on the first concert date of the tour, it became clear that the Philly Don’t Orchestrate Apartheid campaign had gone on an international tour of its own.

In Brussels on May 24, demonstrators disrupted the orchestra’s performance with chants of “Free, Free Palestine!” and unfurled a banner in the front row demanding cancellation of the tour. Conductor Yannick Nézet-Séguin left the stage, followed by the rest of the orchestra. The concert was delayed for 25 minutes as demonstrators were removed from the hall.

Two days later, over two dozen demonstrators gathered outside the Paris Philharmonic and urged patrons not to cross the international Boycott Divestment Sanctions picket line. Several patrons expressed disgust at the Philadelphia Orchestra’s decision to tour Israel and said they would not have purchased tickets if they had known. In an act of solidarity with Palestinians, at least one ticket holder refused to go into the concert hall after learning about the tour.

Back in Philadelphia, in an op-ed published May 24 in the Inquirer, Philip Gentry, a musicologist at the University of Delaware, called out how “out of touch” the orchestra has shown itself to be, referring to the trip as “a right-wing fantasy tour of Israel.”

Gentry noted that the orchestra’s itinerary included “meetings with right-wing politicians, military leaders, and corporate tycoons. In partnership with the Jewish Federation of Greater Philadelphia, donors accompanying the tour could even make a special VIP visit to an Israeli Defense Force base, where one doubts their recent killing of 62 protesters in Gaza will come up. In response to the protests, the orchestra now claims it ‘intends to spend as much time as possible interacting with Arab communities to deepen our understanding of life in the region, and how we can continue to engage in conflict resolution through music.’ The orchestra will pardon us if this is a little bit hard to imagine.” (Philly.com, May 24)

Berlin-based viol player and musicologist Laurence Dreyfus also spoke out against the tour on May 27. He is a signer to a petition, circulated in March, calling for the orchestra to honor the cultural boycott of Israel. His father, George Dreyfus, was a violinist with the Philadelphia Orchestra for nearly 50 years. Dreyfus said his solidarity lies “entirely with the protesters outside the halls.”

Dreyfus, who is Jewish, asked: “Is the orchestra happy to have taken such a partisan side in this case, despite their disavowals to the contrary? I suspect Matias Tarnopolsky [the orchestra’s incoming CEO, who starts in August] will have some damage to undo when he arrives on the Delaware.” (Philly.com, May 27)

The Philadelphia Orchestra told the Inquirer that it is now bracing for the fact that these demonstrations will follow it across Europe. No matter how “resolute” the orchestra management claims to be, its stubbornness does not compare to the growing international solidarity with the Palestinian people, especially as Israel steps up its brutal occupation of their homeland.

The orchestra can’t claim it was not forewarned. In a recorded message that reverberated through the Kimmel Center’s Verizon Hall during the last Philadelphia concert on May 19, Palestinian author and activist Susan Abulhawa said: “If you think your collaboration with that murderous gangster state will blow over, then you sorely underestimate our pain; you underestimate our love for each other and our anger and resolve.”