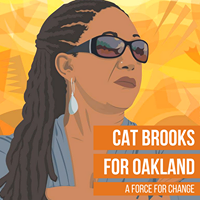 Oakland, Calif., May 22 — Workers World interviewed Cat Brooks, co-founder of the Anti Police-Terror Project and executive director of the California Justice Teams Network, who just announced her candidacy for mayor of Oakland. This is the first time a Black radical leader has run for this post since Bobby Seale of the Black Panther Party did in 1973.

Workers World: What is it about the political scene in Oakland that makes it the right time for Cat Brooks to run for mayor?

Cat Brooks: I think it’s the political scene in Oakland, but also the political scene nationally. We have said as an organization collectively since Trump got elected that there’s a blessing in Trump. It woke people up, it reinvigorated people who are already working, but it also woke up your mainstream, “I work 9 to 5, I’m not a racist, but I don’t do any actual work in the movement, but I consider myself a good person, and I believe in what this country says it’s supposed to be.”

[With the election of Trump] that group of people was yanked out of the sleepy reality of America being a democracy for all people. And they want — no, our goals are not the same — things the way they used to be pre-Trump, where they thought everything was okay because Obama was in office. That said, that shifts the conditions because people want to do something, and so what you’re seeing is across the country more left-leaning organizers and activists running and being elected to office.

Secondarily, we’ve had four years here, almost, under a neo-liberal mayor, where the unhoused population has exploded. The city says there are 3,000 homeless people, and that’s really closer to 6,000. Massive amounts of Black people have been displaced.

You can’t drive down the street without running into a crane because there’s so much development, and I hate the word development, because that sounds like it’s a positive thing. And none of those buildings are targeted to house the folks that need housing the most.

Oakland has spent the last however many years giving the city away. And so there are no checks and balances for developers. And the artists who flock here because of cultural diversity, they are being pushed out.

There are so many things that are happening that require someone to be inside of that seat, who is going to dramatically shift the city’s priorities and force some very different conversation. We don’t think it should be polite conversation about people sleeping outside, we want to talk about the gross reality about what’s happened in this city and really hold the current mayor accountable for what she’s done.

WW: You lead the Anti Police-Terror Project. How does that fit with a mayor who would be in charge of the police?

CB: Of course, I’m an abolitionist, I don’t believe that policing can be fixed in this country. I do believe in radical reform on the way to abolition, though. We have to be radically shifting the way we talk about community safety and security while enacting reforms that enforce transparency and accountability, and dramatically decreasing the number of Black and Brown bodies that are falling at the hands of law enforcement.

We’ve spent a lot of time saying Defund OPD [Oakland Police Department] by 50 percent. Here in Oakland the police department gets close to 43 percent of the general fund, plus millions in overtime. That’s ludicrous. So what the team is working on right now is figuring out legally what can we do? How much can we divest from law enforcement? What are the resolutions that would have to be passed to be able to divest even more?

Where would funding streams come from where we can beta test community safety teams and utilize neighborhoods as testing ground for what it would look like to not call the police in X, Y and Z situations and train people up. What does it look like to invest in prevention rather than criminalization, so all of these after-school programs, and things like “Take Back Our Streets” in East Oakland that are really working with the youth … and the D boys, what does it look like to invest in them?

How do we build up the cannabis equity program that we have here so that we can give more licenses to people who have been criminalized for being Black and criminalized for engaging in the sale of marijuana? So it looks like divesting as much as we possibly can within the limits of the law and pushing that limit every single year that I’m in office.

WW: You’re talking about doing people’s assemblies around the city. Is that from the Jackson, Miss., model?

CB: Yes, I’m in conversation with Kali Akuno (Cooperation Jackson). He’ll support and advise the campaign. That said, Oakland and Jackson are two very different places. They’re different in terms of population, of how many Black folks are there, and of what types of industry are there. The plan is to talk to Kali and figure out what is extractable from Jackson into Oakland.

WW: What else do you want to tell people about this campaign?

CB: We need to, as a movement, be throwing our dollars behind all the grassroots campaigns that are taking place around the country. Whether these people live in your city or not, for those who can, we need to be making donations to the Stacey Abrams [first Black woman to win the Georgia Democratic gubernatorial primary] campaign, and to John Parker’s campaign [Workers World Party candidate for U.S. Senate in California on the Peace and Freedom Party ticket].

We need to be supporting these campaigns whether they directly impact us or not, because they do. Because the more of us that are in office, the more of us there are for us to bang from both sides of the system. The second thing is that this campaign is different in that we are truly building our platform in partnership with the community.