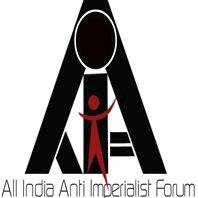 Manik Mukherjee, Vice President of the All India Anti-imperialist Forum, issued the following ­statement on May 15.

The All India Anti-imperialist Forum strongly condemns the shifting of the U.S. Embassy to Jerusalem which finally puts a seal to Donald Trump’s earlier announcement of U.S. recognition of Jerusalem as the capital of Israel.

This is a clear violation of international law. To add insult to the injury, this blatant act was perpetrated a day before the 70th anniversary of what the Palestinians observe as Naqba (catastrophe), when millions of Palestinians were driven out of their homes during the violent birth of the state of Israel in 1948, which fell in the proposed territory of Palestine. The UN resolution of 1947 clearly stipulated an international status for Jerusalem. Trump’s earlier announcement was criticized by the majority of the nations and was condemned in a motion adopted in the General Assembly with overwhelming support. In the Security Council the condemnation motion was vetoed by the United States after a 14 to 1 vote.

The birth of Israel in 1948 was marked by a war with the Arab states through which Israel illegally annexed West Jerusalem. After the 1967 war it annexed East Jerusalem too, and in 1980 it proclaimed “unified and complete” Jerusalem as the capital of Israel, which was a clear violation of international law. But most of the countries did not recognize Israel’s sovereignty over Jerusalem, and countless resolutions were passed in the UN condemning Israel as the violator of international law. But Israel paid little heed to these because of the support of U.S.A. and other imperialist powers.

The latest act of President Trump is a clear negation of the mandated international status of Jerusalem and will block any settlement of the Israel-Palestine conflict through dialogues and discussions. The Palestinians of West Bank responded to the U.S. act with anger and demonstrations. In response Israel brutally attacked the demonstrators with warplanes, tanks and guns. Already more than 55 people were killed in Gaza border in one day and thousands were injured. But this has not dampened their resolve to fight for their rights, and whole families have come out to participate.

The All India Anti-imperialist Forum stands in solidarity with the Palestinian people fighting to realize their just demands and strongly condemns the aggression of Israel and its barbaric attack on the demonstrating Palestinians, including women and children demanding their legitimate rights.

We call upon all the freedom-loving people of the world to rise up in protest against Israeli attacks on Palestinian people, abetted by U.S.A. in league with other imperialist powers. Israel must desist from annexing Jerusalem as its capital.