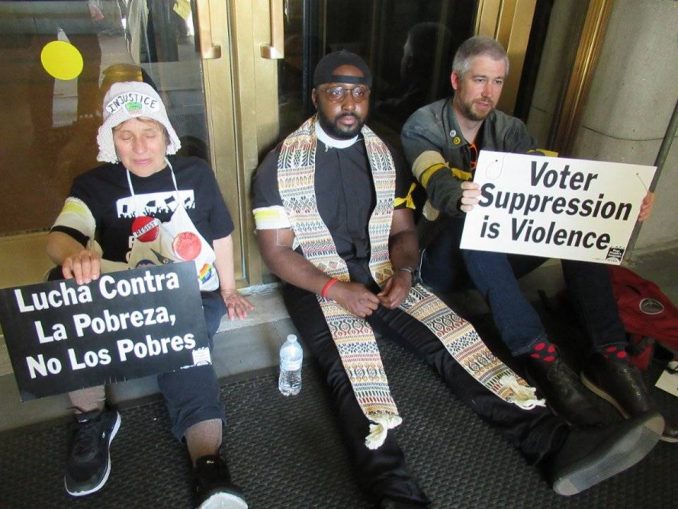 Albany, N.Y. — The second week of the Poor People’s Campaign found several hundreds gathered here on May 21 in the capital of New York state for protest and civil disobedience.

Launched on May 14, the campaign is holding themed protests on Mondays throughout the U.S. against systemic racism, poverty, the war economy and environmental devastation. These protests will end on June 23. The campaign is inspired by the original Poor People’s Campaign called by the Rev. Dr. Martin Luther King Jr. in December 1967, a few months before his assassination.

This week’s theme was “Against systemic racism and poverty: voting rights, ending mass incarceration and justice for immigrants.”

Organizing out of a bilingual working-class church here, this multinational PCC gathering included ministers, rabbis and Muslim leaders, along with an organized group of unemployed Brooklyn workers, students, retirees, anti-war vets, members of Jewish Voice for Peace, parents with kids and revolutionaries.

The contingent marched silently for a mile to the Capitol building. During the march, Puerto Rican PPC volunteer Taina Asili gave a passionate speech on the struggles of her island and the U.S. government’s continuing oppression. She connected this to the campaign’s themes of fighting systemic racism and poverty and winning justice for immigrants.

When the march reached the Capitol, PPC volunteers proceeded with a sit-in at the doors of the building to dramatize their demand that legislators take immediate steps to confront racism, poverty, war and ecological devastation. Others in the contingent sang the Civil Rights Movement song, “We Will Not Be Moved,” in solidarity.

The campaign’s call for a “moral revival” intensified with the arrests of 27 sit-in volunteers. Later protesters learned of police brutality against minister Peter who was framed on charges of resisting arrest and disorderly conduct while suffering a head injury after being attacked by a cop. As buses rolled protesters toward home, including back to a Harlem church, PPC attorneys remained at the ready to defend arrestees.

The day spoke eloquently of the need for a nationwide united movement and struggle for justice on these crucial issues.