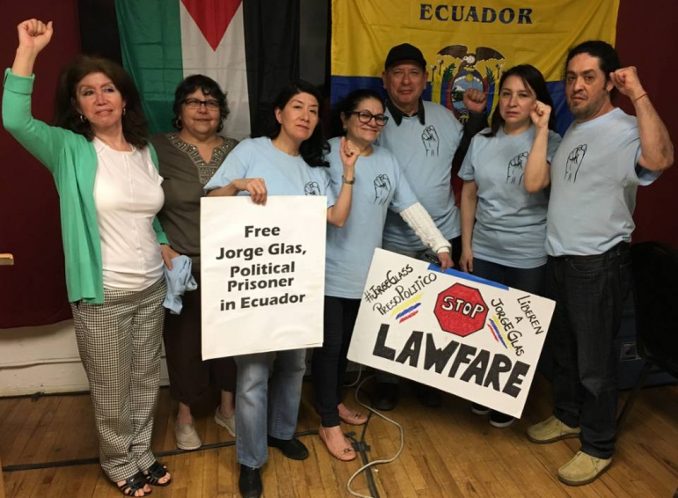 Based on a talk given at a May 10 Workers World Party meeting in New York City. The writer is a member of Acción Revolucion, a group of Ecuadorean activists.

Jorge Glas was first elected vice president in 2013 during President Rafael Correa’s second full term, though he previously held a number of top positions throughout Correa’s 10-year presidency. As a proponent of the Citizen’s Revolution, Glas implemented a variety of policies for the public’s benefit, including the construction of a number of hydroelectric power plants and the implementation of multipurpose works that helped farmers with their crops.

In 2016, Glas announced his candidacy for the vice presidency again, this time as the running mate of Lenín Moreno, who was seeking the presidency as Correa’s successor in the Alianza Pais movement. Those opposed to the Citizen’s Revolution movement immediately sought to discredit Glas. Articles were written charging him with illicit association in connection with Odebrecht, a construction company that paid bribes to various government officials throughout Latin America.

The first allegations against Glas were published by the newspaper La Estrella de Panamá, based on false information delivered by Guillermo Lasso and Andrés Páez, who ran as candidates of the opposing party. Ana Cerrud, the deputy director of the newspaper, later admitted that no evidence had been provided to back the claims.

Following the electoral victory of President Moreno and Vice President Glas in 2017, Moreno shifted loyalties completely. He developed a relationship with the infamous Gustavo Larrea, who had been fired from his position as minister of the interior by Correa’s government after it came to light that he had channeled information to the CIA regarding a FARC [Revolutionary Armed Forces of Colombia-People’s Army] encampment in Ecuador.

Moreno opened up dialogue with opposition parties and began giving away successful achievements of the Correa government. Control of major public electric enterprises was handed over to the Bucaram family, a group with a history of criminal activity in Ecuador. Private banks were given management rights over electronic transactions between the government and the citizenry, from which the bankers take a cut. A variety of other reactionary measures were undertaken, which Glas denounced in a public letter on Aug. 2.

In retaliation, the next day Moreno issued a decree relieving Glas of all functions of the vice presidency, though he claimed to be doing so due to the rumors of Glas’ involvement with Odebrecht. The corrupt media that had published unsubstantiated lies called for an investigation, which Moreno hypocritically backed under the guise of fighting corruption, despite his propensity for appointing criminals from the Bucaram family to important posts.

With constant coverage by the government, media and political organizations placing pressure on the judicial system to address the accusations, Glas asked the Assembly to take away his constitutionally granted immunity against investigation, stating, “I do not fear anything because I have not done anything.”

Upon the removal of his immunity, a general prosecutor had Glas put into custody, in violation of his due process rights, alleging that he was a flight risk. The government claimed that this imprisonment counted as a “temporary absence” under Ecuadorian law and that after 90 days the absence would become “definitive.” In this way they’d be able to remove Glas from office without even having a congressional vote.

In the interim, the prosecution was able to bring criminal charges against Glas after presenting evidence to a grand jury that was manipulated to implicate Glas in the Odebrecht scandal. The prosecutor had gone to Brazil to meet with José Conceição Santos, an Odebrecht executive who had been found guilty of corruption. Following that meeting, Santos testified against Glas, claiming he’d routed bribes to Glas through Glas’ uncle. In return for his testimony, Santos was given a plea deal that resulted in a reduced sentence for his crimes.

Glas was found guilty of illicit association and sentenced under a repealed law that provides harsher punishment than current law. At this point, with 90 days having elapsed since his imprisonment, Glas was removed from the vice presidency and replaced with one of Moreno’s cronies.

It is important to point out that Alianza Pais, a movement founded by Correa, has been fractured following Moreno’s takeover through the manipulation of the judicial system and the CNE [National Electoral Council]. A majority of its members have disaffiliated from the party, because they do not agree with its shift toward the right, and have been trying to form another party. But they have been blocked by the CNE for spurious reasons, like the names they’ve attempted to register under.

How could Glas be convicted on the basis of nothing more than the testimony of a convicted criminal like Conceição from Odebrecht, a company that has been involved in corruption in several countries in Latin America?

Given the rise in the current administration of people like Larrea, the CIA informant, as well as recent actions taken against leaders like [Lula] Da Silva in Brazil and [Cristina] Fernández in Argentina, we believe Glas’ persecution is a continuation of the CIA’s efforts to destroy progressive governments and interfere in the sovereignty of Latin American countries by engaging in “lawfare” — that is, legal warfare.

It is imperative that we defend Vice President Glas and fight against this new form of imperialist intervention. To do this, our organization is seeking to join forces with other progressive movements to form an international coalition. Please join us in our struggle to bring justice for Vice President Glas!