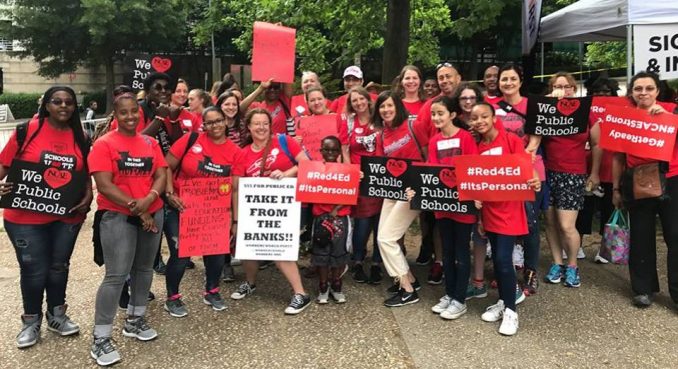 The North Carolina Association of Educators (NCAE) called for the “March for Students and Rally for Respect” with the #ItsPersonal hashtag, asking teachers to “come to the first day of the General Assembly short session.” Teachers responded by paying $50 for a legally protected “personal day” and mobilizing to get to Raleigh.

Though the march permit included sidewalks only, people took to the streets by the thousands. They swarmed the former Capitol building, overwhelming the statues and monuments to the old guards of white supremacy. Their numbers wrapped the current legislative building on both sides, from the front doors around to the back.

Mainstream media focused on the supposed primary motivation of North Carolina’s movement as low teacher salaries. Low pay was certainly a factor, but both liberal and right-wing conservative politicians deliberately narrowed the rally into a single-line issue rather than admitting the statewide inequities of public school funding.

These politicians ignored facts like the state spending $2,400 less per pupil than the national average. The funding shortages limit student access to school nurses, counselors and other support staff, while public school buildings continue to age with mold, termites and other unsafe conditions.

Above all, the politicians’ focus on teacher pay erases the imperative to talk about how increased corporate benefits decrease money available for public education. North Carolina has lowered the corporate tax rate from 6.9 percent in 2012 to 3 percent. This is the lowest in the country, even before another planned drop in 2019 to 2.5 percent. Nearly $3.5 billion in potential revenue will benefit corporate interests instead of education.

In this “right-to-work” (for less!) state, not so subtle threats have been made against those participating in the May 16 action by calling it “union-like activity.” Rep. Mark Brody referred to educators who choose to pay to exercise their First Amendment rights as “union teacher thugs.”

Indeed, even before the educators, custodians, bus drivers, city workers, parents and students from the town of Manteo to Murphy County walked Raleigh’s streets, they looked after their own.

A network of educators and supporters — across the political spectrum and from religious conservative to atheist — formed into a community. They collected and distributed meals and organized child care options for their districts’ children in preparation for the May 16 action.

Personal donations went to groups for grants to support those from less wealthy counties — both children and educators — in their travel to their legislators in Raleigh.

And though an all-white state legislature in 1959 banned public sector collective bargaining, May 16 was absolutely a union-like activity.

The NCAE is an educator union, one of the many state branches of the 3-million member National Association of Educators. The North Carolina state law against collective bargaining in no way prevents North Carolina’s public workers from organizing and unionizing.

Re-segregation in education — for profit

The North Carolina Legislature is Republican-dominated, but there is bipartisan support for capitalist schools-for-profit. That means teachers need to look deeper into why a “democratic” government seeks to prevent adequate education of children — a question nearly silenced by “This is what democracy looks like!” chants during the day.

The significantly quieter “Black Lives Matter!” chants from a largely white crowd also raise the critical need for an examination of racism and power in North Carolina public schools, where the majority of teachers are white while half the children in their classrooms are students of color. (publicschoolreview.com/north-carolina)

For the past 10 years in North Carolina, a series of anti-public-school bills have been introduced and passed, designed to destroy free public education and produce uneducated workers. This legislation includes the existing private school voucher program that funnels money out of public schools. A bill introduced in 2017 would actually move public money for a student into a parent’s savings account. But it’s mostly corporations that benefit from for-profit charter schools in a state heavily influenced by efforts to privatize public education.

An advisory committee to the University of North Carolina state system was stacked in 2015 with right-wing extremists, whose efforts seemed designed to resurrect the white supremacist education policies that maintained school segregation in North Carolina for more than 20 years after the original 1954 Brown v. Board of Education decision of the Supreme Court. Then, this February at the state Capitol, a joint legislative committee began issuing proposals to “break up” school districts, seen as a precursor to re-segregation.

The reason for these attacks isn’t complicated, based as they are on the old “divide-and-conquer” tactics used to keep workers oppressed and divided. In the 150 years since the Civil War ended, North Carolina has increased wages from the $0 paid to enslaved Black laborers to a meager state minimum wage of $7.25 an hour, with most workers of color still earning significantly less.

In 2013, right-wing legislators repealed migrant worker protections. In 2017 Republican legislators used transphobia to hide the fact that they were repealing anti-discrimination policies for LGBTQ workers through HB2. Poverty wages for female-dominated professions, such as public education at all levels, are considered to be “on the right track.” The school-to-prison pipeline is flourishing as Democratic Gov. Roy Cooper found $7 million to increase the number of “school resource officers,” aka cops, despite data-driven reporting showing police bias in classrooms is the same as police bias in the streets.

Art Pope and the Koch brothers vs. public education

The attacks on public education should be no surprise, considering the deep involvement of Art Pope in North Carolina politics. Pope is the CEO and board chairman of Variety Wholesalers Inc. This is the parent company of low-wage, low-end, retail stores found in rural towns across the state. In 2013, Pope wriggled into a role as budget director to former Duke Energy CEO, turned anti-LGBTQ governor, Pat McCrory. But long before that, he founded the John William Pope Foundation.

From this foundation, Art Pope funds hundreds of millions of dollars in grants to think tanks like the John Locke Foundation and the Heritage Foundation, to wage a privatization war on public institutions.

Pope’s personal wealth buys a seat at the billionaires’ table. His ties to the right-wing Koch brothers create additional influence that powers privatization, re-segregation and the re-creation of racist Jim Crow government, hidden under the guise of “school choice.”

Organizations funded by Pope’s foundation publish misleading and faulty analyses that offer privatization and “school choice” as a cost savings. But this is research funded by the obscenely rich to justify their raid-for-profits on programs that were created for the common good.

Pope campaign donations funded the election of people like Sen. Phil Berger and Rep. Tim Moore in North Carolina, men who direct their respective legislative bodies to serve capitalism and corporate interests, not the needs of working people, families and children.

But on May 16, despite the polarizing tactics and hateful rhetoric, teachers and public education workers shared a common goal and came together in what’s being called “the largest act of organized teacher political action in North Carolina history.”

Keeping up the mass, militant pressure — uniting workers and community — is imperative. In both Oklahoma and Arizona, where there were many days of education actions, the right-wing legislatures are reversing already-won gains by repealing tax-funding measures or using state-funding tricks to deny raises.

The education workers are teaching workers everywhere that mass actions are possible and necessary to every worker, every community, in every industry, in every state.