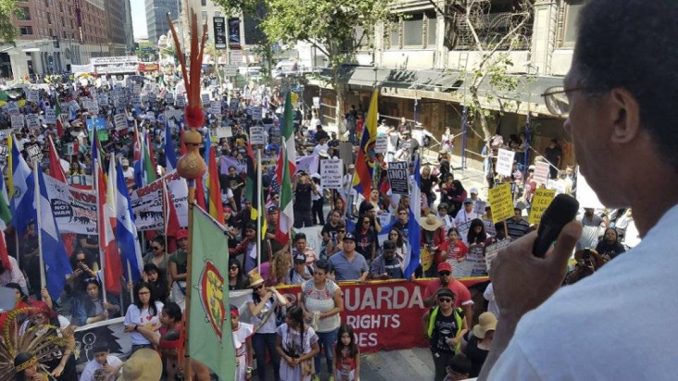 Thousands joined several May Day marches in Los Angeles — the majority of participants from the city’s huge migrant population. All the marches in this multinational city were a defiant message of resistance against the continuing bigotry and legislative attacks on im/migrants and all workers by Washington.

One demonstration and march began at MacArthur Park, initiated by Unión del Barrio and supported by California for Progress, Workers World Party, BAYAN-USA, the Association of Raza Educators and others. It drew 1,000 or more people and marched to the steps of City Hall for a closing rally.

There, to a cheering crowd, John Parker, a longtime Workers World Party member who is the Peace and Freedom Party candidate for the U.S. Senate, showed his campaign to be a different kind of senatorial race. He emphatically blamed the Democratic Party equally with the Republicans for the multiple crises of capitalism. He denounced the attacks on DACA (Deferred Action for Childhood Arrivals), deportations, racism, and police murders of Black and Brown youth. And he pointed to the dissolution of the U.S. war machine and to peoples’ ownership of the means of production as the only way to full liberation for people of color and the working class.

In a released statement, Parker said, “I’m running to quicken the pace of the revolutionary process liberating humanity from exploitation, oppression, poverty and war.”

The other large Los Angeles march of the day, gathering at Pershing Square, was called by a coalition of trade unions, including the Teamsters, the Service Employees Union and others, and the migrant rights organization Coalition for Humane Immigrant Rights. The crowd marched to a rally at the nearby Federal Immigration Detention Center.

Later in the day, people gathered at Broadway and Olympic Boulevard for another protest that marched up Broadway, where tens of thousands of migrant workers make their living in the garment district. Two more protests took place in the Boyle Heights area of East Los Angeles, where a brilliant battle is being waged against greedy landlords trying to gentrify the historically Latinx neighborhood.

For more information on the John Parker senatorial campaign, go to https://www.facebook.com/parkerforsenate/