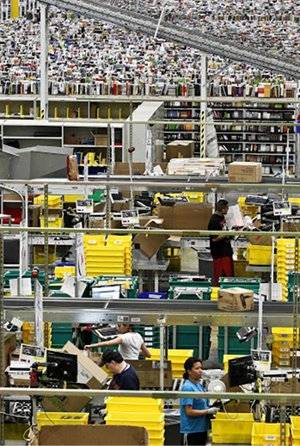 Massive gentrification in Seattle, led by the Amazon company and its headquarters here, has restructured the city. Amazon now rents or owns several dozen new office towers and is building more. There are now 45,000 Amazon employees in downtown Seattle. Other companies, like Expedia and Weyerhaeuser, have moved into downtown Seattle.

A gold rush of corporate towers and expensive apartments has led to skyrocketing rents, an epidemic of housing evictions and foreclosures, and a great crisis of homelessness for Seattle’s workers. It’s actually a crisis for all workers, since rents have gone up 65 percent in 10 years.

The havoc that Amazon has caused in Seattle is repeated across the country and internationally, as this company seeks to monopolize the retail industry by means of worker and community exploitation, along with destruction of its competitors.

There are 11,600 homeless people in Seattle and Martin Luther King County, according to All Home, a community group fighting homelessness. One-third are Black, in a county which is 7 percent Black. Almost half live outdoors, since the capitalist system doesn’t provide adequate shelter.

The homeless live in many camps and are highly visible for miles throughout the city center. The city of Seattle, beholden to big business, has used brutal repression more than anything else in dealing with homelessness. Five hundred camps were swept out of existence in a recent year.

In April, the Seattle City Council, led by Councilmember Kshama Sawant, started pushing for a $75 million a year tax on big business to build affordable housing. This bill is supported by a coalition of homeless and political groups, along with 10 labor unions, including the Martin Luther King County Labor Council.

Under the bill, an employee head tax would be levied on the city’s 580 largest employers. Amazon would have to pay $20 million, a drop in the bucket for a company with $700 billion in assets.

Just before City Council hearings the week of May 7, Amazon announced that it was going to “pause” construction of a new office tower to oppose the new tax. Faced with the possibility of losing work due to Amazon’s threats, two construction trade unions, the Ironworkers and the Carpenters, sent several dozen workers to City Council hearings to oppose the bill. They were big news on the big business media.

But other speakers at the hearings exposed Amazon for extortion and for its blatant attempt to divide the working class. Speakers for the homeless predominated for several days at the hearing. They said that 42 homeless people, including children, had died outdoors already this year, and that one in 16 children in Seattle public schools is homeless. It was also exposed that Amazon paid no federal income tax last year, but received a $137 million rebate instead.

Amazon reeled in $1.6 billion in profits in the first three months of this year. CEO Jeff Bezos is the richest person in the world, worth a jaw-dropping $130 billion.

The City Council, led by Sawant in a contentious hearing, passed the $75 million bill by 5 to 4. But Mayor Jenny Durkan, who received $350,000 from Amazon to get elected, vowed to either veto the bill or water it down. She wants to cut the housing tax in half and sell the homeless short. Sawant responded to this threat by saying that $150 million for affordable housing is what is really needed.

On May 12, people marched on Amazon, in a protest organized by Sawant’s office, including Socialist Alternative; the Affordable Housing Alliance, which includes homeless groups SHARE and WHEEL; and the Democratic Socialists of America. Also marching were several rank-and-file members of the Ironworkers union holding a banner reading “Solidarity” in opposition to their leadership.

One of the speakers was Alex Bacon, president of the Washington Federation of State Employees at Seattle Central College. To show the extent of the housing crisis and how it affects labor, he declared solidarity with the workers of United Auto Workers Local 4121. Their union of 4,500 graduate student teachers, researchers and tutors is scheduled to hold a one-day strike at the University of Washington on May 15. They are striking because they aren’t being fairly compensated for their housing and medical costs.