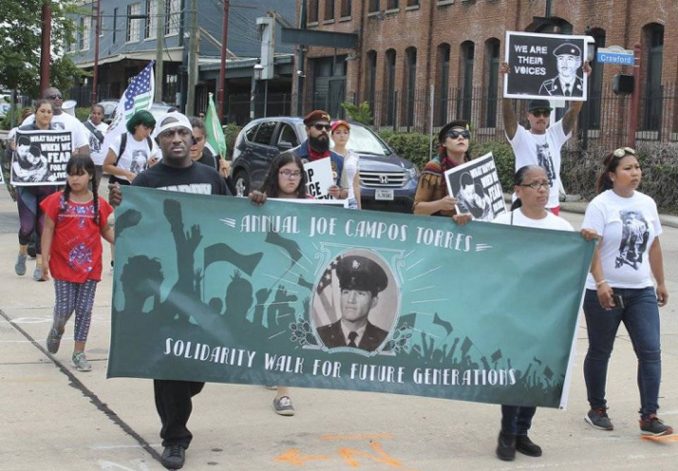 Houston — On Cinco de Mayo, we think of people celebrating, drinking margaritas and eating Mexican food. But for the family of Jose Campos Torres, Cinco de Mayo opens wounds from 1977 that have never healed.

Since 2016, the Torres family has organized the Joe Campos Torres Solidarity Walk for Past and Future Generations. This year, Danza Azteca Taxcayolotl, a traditional dance group, led the third annual walk, followed by members of the Torres family. Community activists and supporters joined Jose’s sisters, Janie and Margaret Torres, his nephews, Johnny Torres and Richard Molina, and his cousins in retracing the last hours of Jose Torres’ life.

On Cinco de Mayo in 1977 Torres’ family began looking for him when he did not return home. A few days later, their worst nightmare became a reality. Torres was found dead, murdered by six Houston cops. His body was discovered floating in the Buffalo Bayou near the McKee Street Bridge.

Torres, a 23-year-old Vietnam veteran, died as a result of one of the most blatantly racist and egregiously cruel cases of police brutality in the history of Houston. Though it was front-page news for months, only two of the cops involved were held responsible — and got off with 1-year probation and a $1 fine.

Mexican residents and most of the people of Houston were outraged. Massive demonstrations took place from the banks of the bayou to shopping centers to police department headquarters.

Police arrested Torres at a bar after an argument and took him to “The Hole” on the banks of the downtown bayou — one of several “holes” used by Houston police to brutalize people they arrest. But afterwards, because of Torres’ serious injuries, the jail refused to book him and ordered the cops to take him to a hospital.

Instead, the cops returned Torres to the “The Hole” and continued to beat him. According to later testimony, officer Terry Denson said, “Let’s see if the [racist epithet] can swim.” Torres was thrown, reportedly handcuffed, into the bayou. His lifeless body remained there for three days.

Janie Torres, who was only 10 at the time of her brother’s death, decided in 2016 to organize a walk retracing the last steps of his life. She sought to bring people together in healing, while shining a light of remembrance on her late brother and other families’ loved ones who had died due to police violence.

The third annual walk was an emotional day for all participants. Janie and Margaret Torres, along with Johnny Torres and Richard Molina — who never got to know their uncle — spoke from their hearts about their loss. As the crowd stood on the ground where Jose Torres was beaten and thrown into the bayou, Johnny read two of his poems.

Some of Johnny’s words were: “I will always remember 1977, that was the day that I died. And I wasn’t even born yet. … Buffalo Bayou turned the color of red, remember what the police said, ‘Let’s see if the [w—-k] can swim.’ … When I learn to let go and find the peace I am looking for, that message will always haunt my mind. If the soldier had any last words, I think they would be, ‘I fought for my country and death is what I got in return.’”

On Cinco de Mayo in 1978, one year after Torres’ murder, as thousands of Houstonians celebrated in Moody Park, the police were called to break up a fight. But when they arrived, those in the huge crowd realized they had a common enemy in the Houston Police Department — and a rebellion began.

The uprising against decades of police occupation and daily brutality in the Northside community resulted in the cop cars burning and blocks of businesses being torched. Nearly 100 people were arrested. As the rebellion progressed, thousands of people chanted, “Justice for Joe Torres!” over and over again.

As this year’s event ended, Janie Torres told those gathered: “Today, I want to say that we need unity. That’s the only way we are going to stop the police from killing us. My family has never recovered from Joe’s murder. My mother has never been the same. This is still happening 41 years later, the cop killings in ‘the land of the free and the home of the brave, with justice for all.’ But there’s only justice for a few, not for all of us.

“If we join together in unity, we can fight! We can win!” concluded Janie Torres. As she and her sister, Margaret, threw a wreath of flowers into the Buffalo Bayou, she said, “This is for you, brother.”