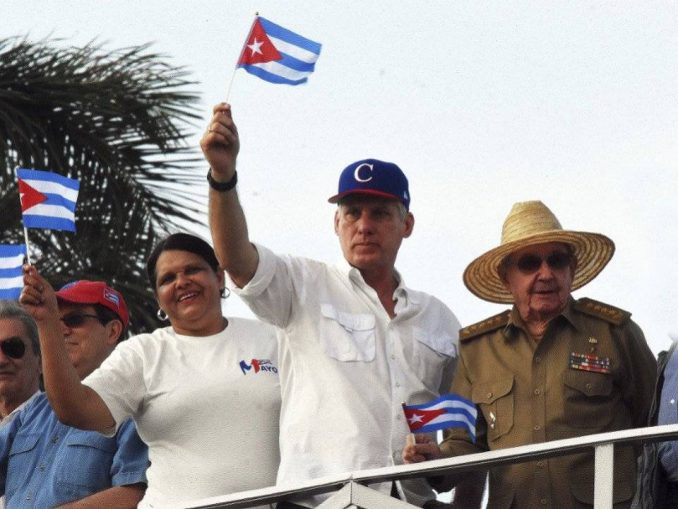 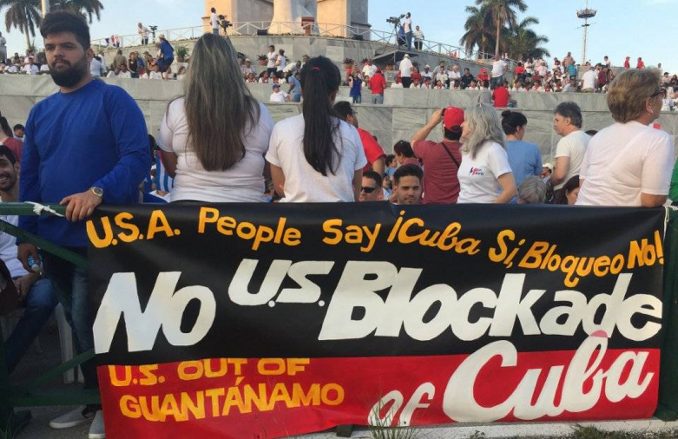 Havana — More than 70 allies of Cuba living in the U.S. celebrated International Workers’ Day in Havana on May 1. These activists participated in the 13th International May Day Brigade and spent two weeks in Cuba, learning about the 1959 revolution and engaging with its legacy. More than 300 people from 31 nations traveled to Cuba to join the brigade.

Cuba’s famous May Day celebration began at 7:30 a.m. on May 1 with the major address by General Secretary Ulises Guilarte de Nacimiento of the Workers’ Central Union of Cuba. He spoke about the ongoing revolutionary engagement of workers and their unions throughout Cuba, the need to preserve collective bargaining power domestically and internationally, and the ongoing demands to end the U.S. blockade and to return the territory in Guantánamo illegally occupied by the U.S. military.

Following these remarks, Cubans began their march through Revolution Square. Nearly a million Cuban workers, soldiers, farmers, retirees and students took their places as early as 4 a.m. to be able to walk shoulder-to-shoulder through their nation’s capital city. All public institutions and industry were closed for the holiday, allowing for the high attendance at the event. Privately owned businesses remained open at the discretion of individual owners.

Marchers held a banner spanning the width of the crowd reading “80 Años de Principios, Unidad e Historia,” which translates to “80 Years of Principles, Unity and History.” This slogan alludes to the revolutionary past of Cuba and calls for a continuation of the revolutionary process into coming decades.

The air was filled with the live music of a large band that performed on the southern side of the square. They played songs, well-known by Cubans, celebrating the revolution and urging its continuation.

Brigade members stood and danced at the foot of Cuban hero José Martí’s memorial on the northern side of the plaza as the march went by. Special guests joined them, including medical students from ELAM, the Latin American School of Medicine, who hailed from such nations as Palestine and South Africa.

Nearby, the Cuban 5 — Gerardo Hernández, Antonio Guerrero, Ramón Labañino, Fernando González and René González — celebrated with their families. The Cuban 5 were political prisoners in the U.S. who were returned to their home in December 2014 as part of a prisoner exchange.

Not far from them, Miguel Díaz-Canel, Cuba’s newly elected president, and Raúl Castro, former president and hero of the revolution, waved and sang throughout the morning. Raúl wore military fatigues and at one point stepped away from the march, only to return a few minutes later wearing a wide-brimmed straw hat to block the heat and sun.

Workers and students carried banners identifying their workplaces and schools. Many were elaborately painted and stretched 20 feet or more. Others carried large Cuban flags and pictures of Fidel Castro or Che Guevara. Some marchers waved rainbow Pride flags.

Brigade members greeted marchers with banners of their own, expressing solidarity with Cubans as they struggled against U.S. imperialism and articulated unity between the workers and their international unions and the workers and their unions in Cuba. The U.S. delegation had painted a banner stating, “U.S.A. People Say Cuba Si, Bloqueo No! No U.S. Blockade of Cuba! U.S. Out of Guantánamo!” They attached it to a wooden barrier so it was visible to marchers as they passed.

The march lasted more than two hours and never dipped in enthusiasm. At the end, workers, soldiers, farmers, students and retirees held dozens of Cuban flags, faced the José Martí memorial and special guests Miguel Díaz-Canel, Raúl Castro and the international brigade, and sang The Internationale. Those facing the marchers waved their own national flags and sang in unison in their own languages.

This year’s International May Day brigade was the second since the beginning of direct commercial flights from the U.S. to Cuba. It also had record high participation from people in the U.S. If the flights remain, it’s expected that U.S. participation will continue to increase. However, given recent warmongering from the U.S. president, this scenario is in jeopardy. This was widely cited by many from the U.S. as motivation to travel to Cuba and participate in the brigade for International Workers’ Day

After witnessing the resilient, revolutionary spirit of the Cuban people, and knowing the crushing grip U.S. imperialism has on the island, many U.S. participants committed to work to end the blockade and expel the U.S. military from Guantánamo upon returning home.

To reserve your place for next year’s brigade, write to [email protected]