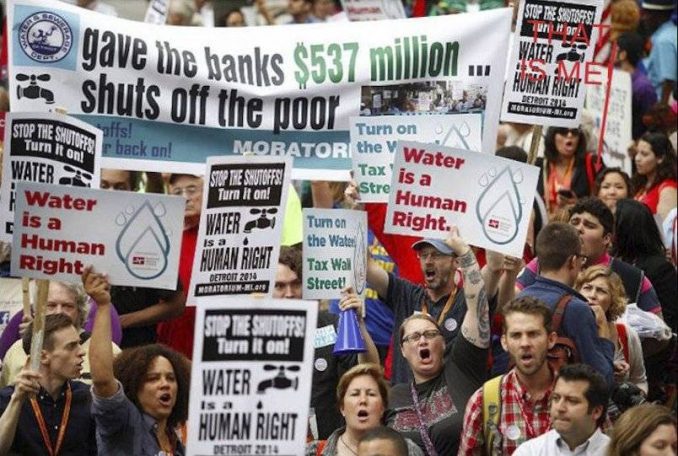 The ongoing fight to stop mass water shutoffs has stepped up with a series of “Solidarity Saturdays” protests at the Detroit Water and Sewerage Department building.

Over 100,000 homes have had water services terminated since mass shutoffs started in 2014 during Detroit’s federal bankruptcy proceedings.  In May the city began the process of shutting off water to another 17,000 residential homes. People’s organizations in Detroit are demanding an immediate stop to the denial of water and sanitation to thousands of families.

An outbreak of hepatitis A, spread by fecal-oral contamination, has hit Michigan since August 2016. Public health officials say it is one of the largest outbreaks in the U.S. since a vaccine was developed 20 years ago.

Over 500 cases were reported in the state in 2017, the highest number in the country. More than 800 cases and 25 deaths have occurred since the outbreak began. Health officials in Indiana have warned residents not to travel to neighboring Michigan without getting vaccinated for hep A.

Against this backdrop, organizations including the Moratorium Now! Coalition, People’s Water Board, Michigan Poor People’s Campaign and Michigan Welfare Rights Organization are calling on city officials to impose an immediate moratorium on all water shutoffs.

Solidarity Saturdays start at noon outside the DWSD building at 735 Randolph St. in downtown Detroit, with a short march to Campus Martius Park near Dan Gilbert’s Quicken Loans.  Gilbert is the city’s main gentrifier and a chief architect of the destruction of Detroit’s neighborhoods due to mass home foreclosures caused by usurious and racist loans.