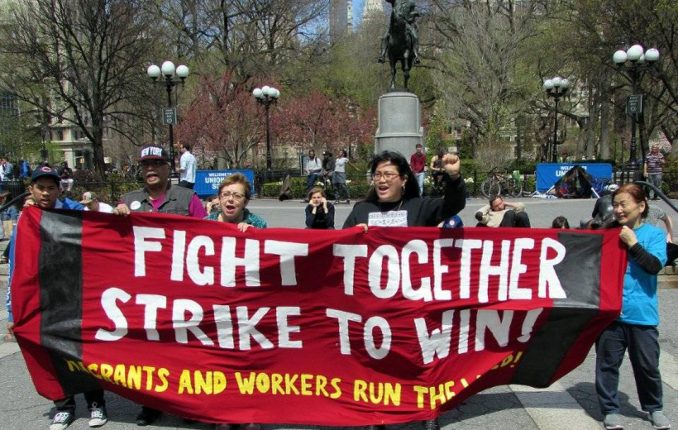 Worker-activists, community leaders and organizers unfurled a striking red banner in New York’s Union Square Park on April 24 to announce plans for this year’s demonstration on International Workers’ Day, May 1. They handed out leaflets and spoke to the media and people enjoying the park on a bright spring day.

Emblazoned with the slogan of the rally and march: “Fight together, strike to win! Migrants and workers run the world!” the banner set a militant tone at the site where New York workers have historically rallied on May Day and where the mass celebration of this revolutionary holiday was revived by immigrants starting in 2006.

“We’re here today with a common call in celebration of the resistance and resilience of the working class and oppressed communities in New York and throughout the world,” declared Nina Macapinlac of the International League of Peoples’ Struggle, a member of the steering committee for this year’s action.

“Every year people gather in Union Square on May Day, as they gather around the world, in defense of workers’ rights,” said Sara Flounders, co-director of the International Action Center, one of the convening organizations. “We stand against all attacks on migrants, the raids and roundups. We stand in solidarity with LGBTQ and gender non-conforming people. We stand together against racism, cutbacks and attacks on Muslims. We stand in solidarity with the Black Lives Matter movement and all our sisters and brothers around the world.”

The diverse group of speakers included Hideko Otake of the Okinawa Peace Appeal, who connected May Day with the fight to remove U.S. military bases in Japan and worldwide, and Marcelo Maia of BRADO-NY [Brazilian Resistance Against Democracy Overthrow], who called on people to rally behind the demand to free imprisoned former union leader and Brazilian president, Luiz Inácio Lula da Silva, aka “Lula.”

Johnnie Stevens of Labor Against Racist Terror talked about the importance of solidarity with workers in an over-one-year strike against Spectrum Cable. “Spectrum works with Goldman-Sachs and Bank of America and makes $412 billion a year, but they won’t pay their workers or their pension plans.” Sofia Adams of Workers World Party read a statement from graduate student workers on strike against wealthy gentrifier Columbia University.

“From drivers in the Philippines to teachers and laborers here in the U.S., workers are organizing and striking to demand safer working conditions, just working hours and better pay,” concluded Michael Garrovillas of BAYAN USA. “Any and all forms of oppression will breed resistance.”

Readers in the New York area are urged to come out on Tuesday, May 1, to Union Square, at 14th Street and Broadway in Manhattan. A rally will begin at 12 noon, followed by 2 p.m. teach-ins and cultural performances, and a second rally at 3 p.m. The May Day march will step off at 5 p.m. For more info, visit Facebook.com/MayDayUnionSquare.