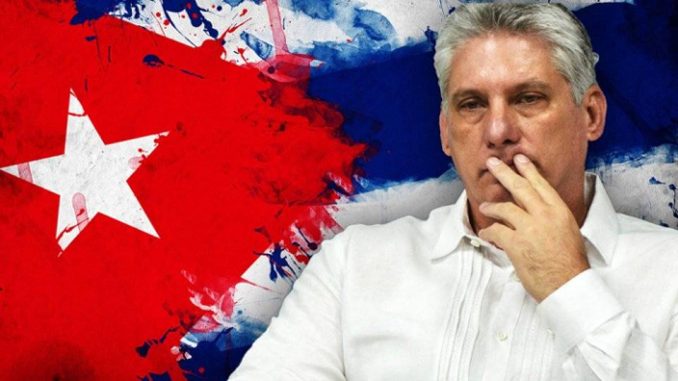 On April 18, the anniversary of the Bay of Pigs, Miguel Díaz-Canel was elected the new president of Cuba.

Perhaps the most thrilling angle about the U.S. capitalist news coverage of the April presidential elections in Cuba was how the media repeatedly described the country as “communist Cuba.”

For the workers and oppressed here, whose lives are marked every day by trauma, Cuba’s ability to defend and build socialism just 90 miles from U.S. imperialism provides immense hope for the future.

Cuba is far from achieving communism. It has been heroically able to build and defend socialism — a step toward communism and an incredible achievement given the non-stop aggression from the U.S., including the longest blockade in history.

There is still inequality and poverty, but it is extraordinary what the Revolution has been able to achieve in a short 59 years.

That the capitalist media describe Cuba as communist shows how much the ruling class trembles from fear of this beloved island.

The end of the ‘Castro Era’?

On April 18, the anniversary of the Bay of Pigs, Miguel Díaz-Canel was elected the new president of Cuba. He followed the presidencies of comrades Fidel Castro from 1976 to 2008 and Raúl Castro from 2008 to 2018.

That the new president was not “another Castro” was met in the U.S. with great fanfare. Did the end of the “Castro era” mean a lessening of revolutionary fervor? Was this new administration a sign of a less-militant younger leadership?

Nothing could be further from the truth.

For more than 50 years, U.S. imperialism has cast disparagement about Cuba’s leadership. Every leader has been ridiculed, mocked and lied about, not to mention has survived countless assassination attempts.

The U.S. repeated the lie that Raúl was “softer on socialism” and more open to capitalism than Fidel. This was an attempt to isolate Raúl. This lie was countered over and over by Raúl’s practices, which were a continuation of Fidel’s, just under a different context.

The “Castro regime” was not a familial regime, but rather a recognition by the Cuban people of two extraordinary revolutionary leaders who happened to be brothers — two exemplary Marxist thinkers and tacticians who astoundingly carried out a revolution to oust a brutal capitalist regime in 1959 and dedicated their entire lives to Cuba and socialism.

That there is no Castro as president means only that these two comrades have gotten older and one has sadly passed on — not a change of political orientation.

Miguel Díaz-Canel, 57, was born after the 1959 revolution. He is described as a loyal “Fidelista and Raúlista,” which can also be said of millions of revolutionaries around the world.

Díaz-Canel has a long history of struggle and political leadership. He was the first secretary of the Communist Party in the province of Villa Clara, a member of the UJC (Young Communist League) and participated in an international solidarity mission to Nicaragua. He has long supported LGBTQ rights in Cuba.

He has worked tirelessly alongside the rebels of Cuba, Fidel and Raúl. This gives extra confidence to socialists and revolutionaries worldwide.

At his inaugural speech he began by recognizing the stellar leadership of General Raúl, who ran for deputy and received the most votes in the general elections. The fact that Raúl and other Commanders of the Revolution were in the same hall gave Cubans the “opportunity to embrace history,” Díaz-Canel pointed out. He raised the many “dark,” but failed “attempts to destroy” the Revolution.

He pointed out that in the National Assembly, which also had elections, women occupy “decisive positions in the state and the government.”

The 2018 electoral process has provided Cubans, Díaz-Canel continued, “the consolidation of unity in Cuba.” In fact, hashtags in Cuba abounded that read #SomosContinuidad (#Wearecontinuity).

“The flag of the Revolution is passed on to Younger Hands” was a Granma headline and a main theme of the elections, as Raúl had made it clear that his generation would do just that.

Raúl: Salute to a revolutionary stalwart

Raúl leaves his position as Cuba’s head of state, but remains first secretary of the Cuban Communist Party, as well as head of the military.

Raúl has rightly earned his place in history. In 1953, he fought at the Moncada Barracks against the brutal regime of the butcher Fulgencio Batista. He was a political prisoner along with Fidel. Raúl is the one who saw something special in Che Guevara and introduced him to Fidel in Mexico. They, along with many others, launched the famous Granma yacht in Mexico toward Cuba in 1956, opening up the guerrilla war to successfully oust Batista.

Raúl was the minister of defense, vice president and second secretary to the Party for 47 years. Under his leadership, he helped strengthen the economy and provided more internet and cell phone access — not because he was “softer” on opening up society or “open” to capitalism, but because the material conditions for such were available.

When Fidel began to get ill in 2006, Raúl took over more of the leadership. During this time he helped oversee the liberation of the Cuban Five political prisoners from U.S. jails, hosted the first visit of a U.S. president since the Revolution, hosted the Colombia Peace Talks, and achieved many other significant accomplishments.

Díaz-Canel said of Raúl, “He remains our First Secretary, as the reference that he is for the revolutionary cause, teaching and always ready to confront imperialism, like the first, with his rifle at the ready in the moment of combat.”

Raúl “put his sense of duty ahead of human pain,” Díaz-Canel said, in reference to the loss of Commander in Chief Fidel Castro on Nov. 25, 2016. (Granma, April 18)

“I assume this responsibility with the conviction that all we revolutionaries, from any trench, will be faithful to Fidel and Raúl, the current leader of the revolutionary process,” Díaz-Canel declared at his inauguration as the new president of Cuba.

He continued, “I confirm that Cuban foreign policy will remain unchanged. Cuba will not accept conditions. The changes that are necessary will continue to be made by the Cuban people.

“I do not come to promise anything, as the Revolution never has in all these years. I come to fulfill the program that we have implemented with the guidelines of Socialism and the Revolution.”

As for the enemies of the revolutionary process, he said: “Here there is no space for a transition that ignores or destroys the work of the Revolution. We will continue moving forward without fear and without retreat; without renouncing our sovereignty, independence, development programs, and independence.

“To those who through ignorance or bad faith doubt our commitment, we must tell them that the Revolution continues and will continue,” he declared.

His final words at this historic inauguration were: “The world has received the wrong message that the Revolution ends with its guerrillas.”

Fidel once said: “A revolution is a struggle to the death between the future and the past.” In the new period in Cuba, the world sees the best of the past and the hope of the future.